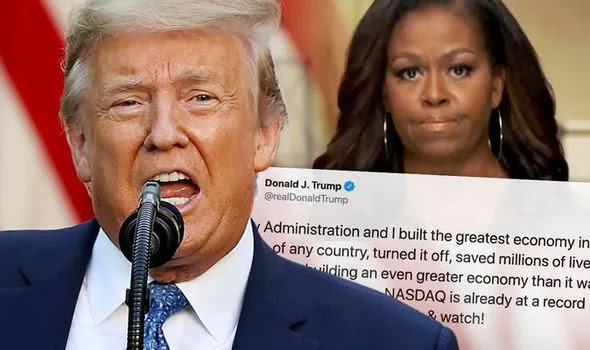 President Trump hit out at Michelle Obama on Tuesday after the former first lady described him as being the “wrong president for this country” during her Democratic National Convention speech.

Obama slammed Trump’s “utter lack of empathy in her speech and warned voters “if you think things cannot possibly get worse, trust me, they can”

The President noted that Obama’s speech was pre-taped and ‘extremely boring.’

ABC News reports: In defense, President Trump spoke of himself in the third person as he sought to remind the former first lady that his first election to the White House came in the wake of her own husband’s two terms in office, which the president argued represented a referendum on Obama.

....My Administration and I built the greatest economy in history, of any country, turned it off, saved millions of lives, and now am building an even greater economy than it was before. Jobs are flowing, NASDAQ is already at a record high, the rest to follow. Sit back & watch!

In his first on camera reaction to Obama’s speech, Trump sought to turn the former first lady’s critique of him — that he is in “over his head” — back on her.

“She was over her head,” the president said, blasting the nation’s first black first lady in response to a reporter’s question at an event commemorating the 100th anniversary of the ratification of the 19th Amendment ensuring women the right to vote.

Clearly irritated by the strongly favorable reaction (though some leftist reporters clearly were not impressed), the president said the address wasn’t deserving and called her address “extremely divisive.”

“She gets these fawning reviews, if you gave her a real review it wouldn’t be so fawning, I thought it was a very divisive speech, extremely divisive,” he said.