President Trump Will ‘Lead America Back to God,’ According to Fascinating 1983 Prophecy 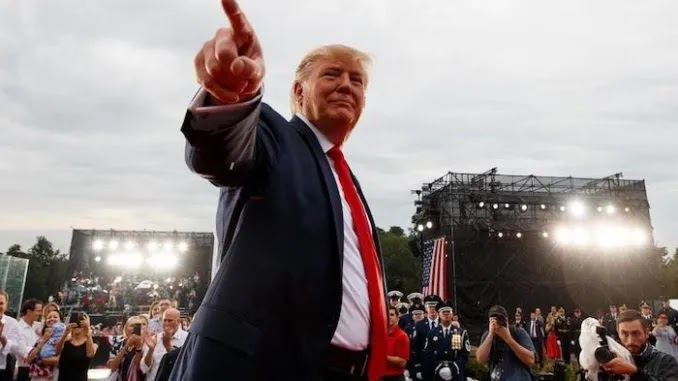 Not many people know there was someone who prophesied in the early 1980s that Donald Trump would bring America back to God.

The fascinating prophecy was actually contained in a somewhat viral video from a few years ago made by a Catholic priest.

That video was viewed over half a million times, and it recounted the story of this Catholic priest’s visit with a holy Catholic man in Loreto, Italy. He called him the “hermit of Loreto.”

LifeSite report: The prophecy about Trump, however, was told not directly to the priest by the hermit, but to the priest’s friend — and he relayed it in his video.

In the wake of the historic letter from Archbishop Carlo Maria Viganò to President Trump and the president’s own recognition of it, that prophecy has taken on new significance.

As Providence would have it, I was able to speak with the original source of the story — Dr. Claude Curran (more on him in a minute).

In 1997, a video by Fr. Giacomo Capoverde from Rhode Island went viral with over half a million views.

The video is Fr. Capoverde talking about his friend Dr. Claude Curran, a psychiatrist who encouraged him when he was going on a visit to Rome to travel to Loreto, Italy to meet a holy man who spent all his life praying in churches.

And in the video, he told the story related to him by Dr. Curran about the holy man’s prediction about Donald Trump.

A few weeks later, on March 6, 2017, there was an intriguing confirmation of some aspects of the story.

An American living in Loreto working as a tour guide was barraged with emails asking him to check out the veracity of the story.

So Bret Thoman, who runs St. Francis Pilgrimages, began an investigation, since he had never heard of the so-called “holy man” — whose real name is Tom Zimmer, a World War II veteran.

The tour guide, although a devout Catholic, described his reaction to the video as “somewhere between skepticism and suspicion.”

Knowing the friars who run the Church where Tom Zimmer was said to have spent almost all his time, Thoman spoke to one of the friars who remembered him as “L’Americano” (the American).

Thoman recounts that the friars “found him to be courteous and polite, if not a little ‘particular.’”

Tom purportedly attended upwards of four or five Masses every day and spent the rest of his time praying.

Thoman was directed to another friar — Fr. Sanatarelli, who had been at Loreto for decades — and as soon as Thoman began describing the American who prayed, Fr. Sanaterelli cut him off, saying “Ah sì, Thomas Zimmer, si chiamava…certo che mi ricordo…” (“Ah yes, Thomas Zimmer was his name, of course I remember him…”).

He went on to say everyone in Loreto knew of him.

Although Fr. Sanatarelli didn’t know anything about the Trump prophecy made by Tom, he could confirm that Tom was in Loreto going to Mass and praying most of the day before he returned to America in 2008.

The friar actually had a photo of Tom Zimmer, which he showed Bret Thoman, who included it in his blog post.

Bret Thoman concluded his investigation into Tom Zimmer this way: “I have no reason to doubt Fr. Capoverdi’s statements that Thomas Zimmer communicated to his friend that he received a ‘premonition’ that Donald Trump would ‘lead America back to God.’”

With regard to the Trump prophecy’s accuracy, he said, that remains to be seen.

I was able to track down Dr. Claude Curran, the original source of the information Fr. Capoverde shared in his video.

Dr. Curran is still a practicing psychiatrist in Fall River, Massachusetts. He too is a devout Catholic with five children.

Several years later, in 1983, Tom told Dr. Curran in St. Peter’s that “right now, in the United States, there’s a man who has the hand of God on him. He has the I.Q. of a genius. And a first-class education. And everything he approaches he attacks with blinding efficiency…his name is Donald Trump.”

Dr. Curran informed Tom that the man he was speaking about was actually known to be a high-flying, jetsetting millioniare who dated models.

“Claude, I am so convincd about what I’m telling you,” Tom continued, “that I have bought a memorial brick for Donald J. Trump, I put his name on it, and he will now benefit from all the masses and prayers in the Vatican for as long as that brick remains in the Holy Door.”

In 2017, Fr. Capoverde already believed that the prophecy of Tom Zimmer was fulfilled in President Trump because Melania Trump led a huge public meeting by praying the Lord’s prayer.

Just think how much more see we’ve seen Trump bring America back to God since then.

And there is no one better to describe that than the former apostolic nuncio — that is, papal representative to the United States of America — Archbishop Carlo Maria Viganò.

At LifeSite, we were privileged to be asked by Archbishop Viganò to publish his open letter to President Trump, and when the president himself retweeted it and spoke of his thanks and admiration for Archibhsop Viganò, it was tremendous.

It is in fact in the archbishop’s letter to President Trump that the fulfillment of that 1983 prophecy of Tom Zimmer can be seen even more clearly.

For the first time, the United States has in you a President who courageously defends the right to life, who is not ashamed to denounce the persecution of Christians throughout the world, who speaks of Jesus Christ and the right of citizens to freedom of worship. Your participation in the March for Life, and more recently your proclamation of the month of April as National Child Abuse Prevention Month, are actions that confirm which side you wish to fight on. And I dare to believe that both of us are on the same side in this battle, albeit with different weapons.

Mr. President, my prayer is constantly turned to the beloved American nation, where I had the privilege and honor of being sent by Pope Benedict XVI as Apostolic Nuncio. In this dramatic and decisive hour for all of humanity, I am praying for you and also for all those who are at your side in the government of the United States. I trust that the American people are united with me and you in prayer to Almighty God.

Tom Zimmer was real, and saintly. He did make that prophecy about President Trump in 1983, and, if it has at least in part been fulfilled already, maybe with Tom’s intercession for America — his homeland — and for President Trump, we’ll see the president do even more to bring America back to God in the future. Source