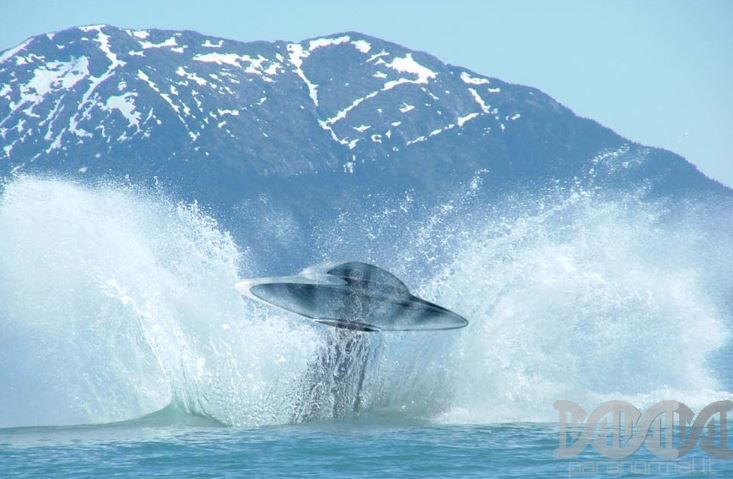 Hundreds of new reports on UFOs appear everyday. One percent of those reports remain a mystery unraveled though 99% of them could be explained by natural or man-made factors.

Let us assume that aliens exist and visit Earth on a regular basis. What would be the best place for them to build a secret base? Seabed would be the best option. The oceans cover two-thirds of the planet.
The ocean remains virtually unexplored. We have a much clearer picture of processes that occur on the Moon, our knowledge of things that happen deep under the surface of the sea is scarce. As it turns out, reports about certain mysterious undersea incidents arrive steadily.

Those incidents are reported by naval officers who normally have good technical expertise and composure. The Navy officers are subject to annual medical examinations.

Submarines have no skylights. Maintaining radio communication under the sea is not easy though a radio wave passes through the water a lot better than it does above the sea surface. That is why submariners largely report incidents related to strange acoustic signals.

“I remember the time when panic struck the brass at the Headquarters of the Soviet Navy. It was in the mid-1970s, and the masters of the nuclear submarines began reporting strange sources of sound. The sound men on board the subs couldn’t identify the sounds detected in the Atlantic while on duty during the combat cruising,” says former senior officer of the Headquarters of the Russian Navy, Captain 1st Rank (Ret.) Vadim Kulinichenko.

“The crew of a submarine had to go though a troublesome experience while doing its best to sneak past the NATO antisubmarine systems and maintain the course as the sub moved at a depth of 200 meters. Some personnel, especially young seamen and midshipmen, could be pretty stressed-out from all that pressure. “

“And suddenly a duty sound man reports a case of ‘unidentifiable sounds’ to the captain’s bridge. The combat alarm stays on as long as sounds are being detected. Because nobody can be certain of the nature of the sounds, probably it’s some brand-new sub or a surface ship of the ‘potential enemy’. The sounds of the unknown could be detected several times a day,” says Kulinichenko.

What kind of sounds are you talking about?

“The sounds varied by the length and tone. The majority of them resembled a long croaking of a frog.”

“The number of incidents involving strange sounds kept growing. The Soviet Navy could not simply brush them aside. Finally, in October 1977, the Navy ordered the captains of the submarines to report all strange sonic incidents. And I know for sure that the U.S. Navy has instructed its subs likewise.”

“The operative staff personnel of all the fleets were told to gather information on any unexplainable acoustic manifestations. Every incident of the kind was to be marked in the charts. The naval officers whose job was to gather such information were dubbed “croakers.”

“There was a “croaker” in the North Fleet where I was serving at the time. Once I happened to take a look at his “for-your-eyes-only” chart. It looked as if the whole North Atlantic, north of Island and upward, had contracted measles. By the way, the term “croaker” eventually settled in. It was used for referring to the source of those strange phenomena,” says Kulinichenko.

Did the Navy arrive at any conclusions?

“No conclusions whatsoever. At first the Navy suspected the Americans, but those suspicions were pure allegations, there wasn’t any evidence in hand. A book titled U.S. Navy Intelligence Against the USSR has been recently published in Russia. It was written by two high-ranking American submariners. It is an interesting book with numerous accounts of U.S. naval reconnaissance during the Cold War era. However, there’s nothing in that book that can refer to the activity of “croakers.” Looks like the Americans have nothing to do with it.”

“Some authors simply confuse one thing with the other while writing about some ‘croaker’ allegedly captured by the Soviet Navy back then. The Soviet and U.S. Navy alike actively used sonic underwater buoys. In short, it’s a boy positioned at the sea bottom for transmitting certain acoustic signals that can be heard within a range of 20-30 kilometers.”

“Locating and destroying a sonic buoy of the potential enemy is really a big deal. For some reasons, the abovementioned authors take the cases of foreign sonic underwater buoys for the capture of ‘croakers’. Nobody has ever caught any of them yet.”

You said the Navy attempted to establish contact with the “croakers.” What are they, after all? Are they UFOs or sounds produced by fishes, other marine animals?

“So far there is no answer to this question. The ocean is like a forest in spring, it rustles thousands of different sounds. The majority of those sounds have been properly described and filed under proper categories. Any Navy training center can teach you to handpick sounds out of a cacophony. ”

“The first croakers were reported in the early 1970s, the ‘croaking’ reports reached a peak in the period from 1975 through 1980. Eventually, they just vanished in the deep blue sea. To my knowledge, the Russian submarines haven’t detected any new ‘croakers’ since the early 1990s.”

Having located a target, the winged sub was to dive underwater, approach an enemy vessel and launch torpedoes. The sub was thought to be an ideal weapon for conducting sabotage activities behind enemy lines.

The design of the flying submarine was approved by the Scientific Research Committee of the Soviet Union. But the project stalled in 1938 due to unknown reasons. Nobody has ever heard of it since.

It is quite possible that the project was put on hold at the time. Either the Soviet Navy or shipbuilders contracted by NATO may have resurrected it in the 1960s or 1970s.

Technical specifications of the flying submarine:

The first submarines were built at the turn of the 20th century. The first mysterious incidents involving submarines came on record during WWI.

On July 10, 1918, the U.S. submarine L-2 and the German submarine U-56 were about to attack each other. A sound man on board the American sub reported yet another U-boat at a distance. No sooner had he finished his report, the first enemy submarine blew up.

The sound of the second unidentified sub died away 20 minutes later. The above sound man claimed that he received a strange message in Morse code: three long sounds and one short. The sounds represented the letters “OE”. The meaning of the message remained unclear.

The captain of the L-2 figured out that the other German sub torpedoed the friendly one that was gearing up for action. However, the postwar documents clearly indicated that only one German submarine operated in that area in the summer of 1918.

In fact, aside from the L-2, no other subs operated in the area. According to documents, the area was free of depth bombs at the time. The strange two-letter message was not used by either of the parties involved in hostilities.

The incident may have taken place due to some sort of confusion during the war. Today it is hard to find out what caused the incident resulting in the sudden demise of the German submarine. However, the statistics released by the International Union of Submariners show that during a hundred-year period, from 1904 to 2004, 204 submarines were lost due to reasons unrelated to hostilities.

In other words, each year 2.3 submarine perishes goes down. Maybe the actual number of casualties is higher. Not every country is willing to declassify data on its vessels deemed sunk or missing.