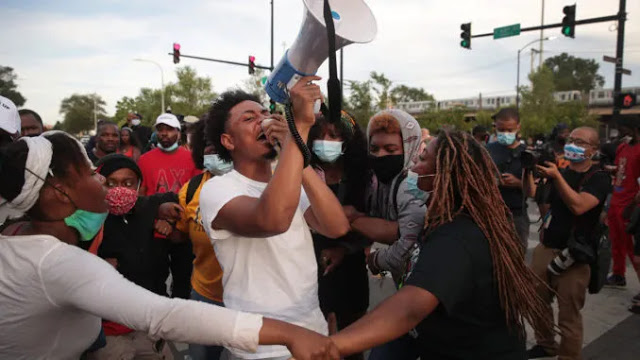 Black Lives Matter potesters who showed up in front of the Englewood (7th) District police station Tuesday night were met by local residents with megaphones, who shouted at them to go home.

Hostilities between the locals and activists almost boiled over into a brawl.

RT reports: A BLM protest march from Englewood to Chicago’s 7th District police station on Tuesday ended in a showdown with community members, at times devolving into shouting matches as locals insisted the demonstrators were giving their neighborhood a bad name.

“If you ain’t from Englewood, get the f**k out of here!” longtime south side resident Darryl Smith was heard shouting at the protesters, who he said were not from the community.

“They were… gonna come to Englewood, antagonizing our police, and then when they go back home to the north side in Indiana, our police are bitter and they’re beating up our little black boys,” Smith told reporters on the scene, adding that “we don’t need any outsiders coming and antagonizing.”

A photojournalist with the Chicago Sun-Times documented some of the march’s more tense moments, including when a heated argument nearly escalated into a physical confrontation.

An organizer of the protest, which was put together by members of Black Lives Matter and advocacy group Good Kids Mad City, told a local news outlet that some demonstrators decided to leave following conflict with residents, saying they felt “unsafe.” Other organizers maintained they were from the local area, but said they said they decided not to participate in the rally due to “agitators.”

The protest came days after the police shooting of a 20-year-old suspect who reportedly opened fire on officers, which kicked off a spree of looting in downtown Chicago over the weekend. Smith said the unrest had been unfairly blamed on Englewood, and that the protesters were only feeding that perception.

“A lot of people are saying the looting downtown sparked from Englewood. We’re not having that. It didn’t spark from Englewood,” he said. “Those [looters] were opportunists, and we’re tired of Englewood getting a black eye for any and everything that happens.”

29.09.2020 laikas 07:39 Where did the millions of bird mummies come from in Egyptian tombs?
According to recent studies, thousands and thousands of remains of mummified birds, from predators to ibises, have been found in burials from the times of Ancient Egypt. But where did the Egyptian priests get such an abundance of animals for mummification?...

28.09.2020 laikas 22:15 Soon Earth Will Plunge Into Mini Ice Age For 30 Years
Some time ago, information appeared that the planet could be colder. The reason for this is the long solar minimum. While everyone around is promoting global warming, new discoveries of scientists will be ignored....