The Brumder Mansion: What’s Going On There? 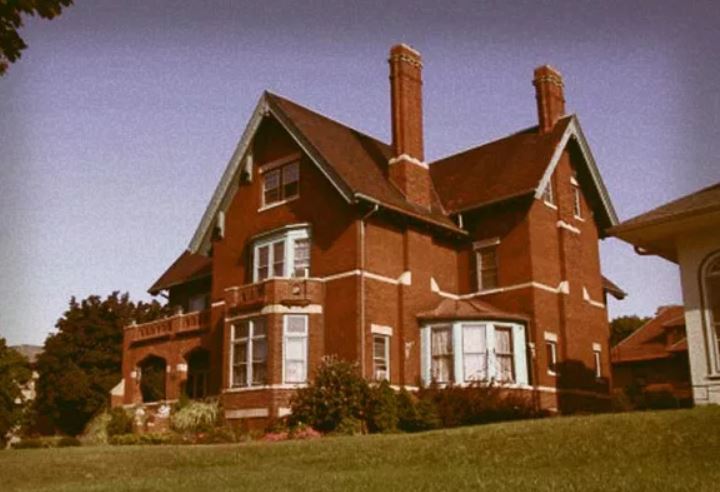 George Brumder Sr. made his fortune publishing German language newspapers, reading material and sheet music. He decided to use some of his hard earned money to build a stately mansion in Milwaukee, Wisconsin for his eldest son in 1910. George Jr. and his wife Henrietta moved in and had eleven children. Only nine survived.

George Sr. died in May of that same year. The Brumder family enjoyed living in this 8,000 sq ft mansion for ten years. When, Henrietta died in the early 1920s, the mansion was put on the market.

It was sold to a man named Sam Pick, his brother Ed and their associates. Sam and Ed were affiliated with one of the Chicago gangster organizations supposedly Al Capone’s.

Their main objective for moving to Milwaukee was to establish a nightclub as a legal front for their illegal side businesses which included black market liquor, gambling and possibly prostitution. They decided to use the ballroom located in the basement for such endeavors.

Sam expanded his speakeasy by moving it to an upscale building on Bluemound Road. He also opened The Club Madrid. It quickly became a popular hotspot known to be a high end nightclub which served fine food and offered a variety of musical talent, dancers and other unusual acts, and black market booze.

The gambling tables were kept somewhere in the building excluding ones used for high rollers. High stakes gambling continued to be conducted in the ballroom. Liquor and in-house prostitutes were offered to these types of clientele as amenities. It is believed Ed was in charge of the high rollers area but there is no evidence to prove this.

Thanks to the repeal of prohibition and paying royalties to those who performed at the Club Madrid, Sam had financial difficulties nearly loosing the club after getting behind on the mortgage payments. However, he managed to rise above it possibly by selling Brumder Mansion to raise some funds.

The high rollers gambling operation in the mansion ceased and the secret tunnel leading to the basement sealed up with cement all played in the Pick brothers favor when they were arrested in the 1930s. Their illegal gambling operation was discovered at the Club Madrid, but they were only fined $1,000 and received no jail time.

Although the Milwaukee mobsters weren’t as kind. Sam was shot and wounded in the late 1930s but managed to survive. When a stick of dynamite was thrown in to his club in the 1950s, he took the hint and retired to Michigan. What happened to Ed pick is unknown.

An English couple bought Brumder Mansion sometime in the mid-thirties and turned it in to a boarding house for employees of a nearby company. In the 1960s, it was bought by the neighboring Lutheran Church to be used as a parsonage and for church activities.

A psychedelic youth chapel was created on the 2nd floor, in what is now George’s Suite. Other rooms were turned into offices, and the ballroom was transformed into a Christian coffee house, complete with live music for entertainment, called The Catacombs. There was a radio station in the Gold Suite.

By 1990s, the upkeep needed for the mansion became more of a challenge for the Lutheran Church. It had a bad roof, white walls, and a buckling ballroom floor. When the central heating system broke down causing the pipes to burst, the church decided to put it back on the market.

In 1997, Brumder Mansion was bought by Carol Hirschi, who put a considerable amount of time and money to rehabilitate the Victorian mansion, turning it in to a bed and breakfast. It’s doors opened once again in 1998. It is now owned by Tom and Julie Carr who purchased the mansion in January 2008 and still functions as a bed and breakfast.

Brumder Mansion’s haunted status went rather unnoticed until Carol Hirschi purchased it and began the restoration. It is believed the construction and various antiques placed throughout the 4-story establishment has led to the numerous spirits who now haunt it. Witnesses have heard voices and footsteps.

An elderly female spirit known as “Aunt Pussy” or “Susan” occupies the Gold Room. A younger female spirit enjoys the 3rd floor. A male spirit roams throughout the parlor as well as George Brumder’s suit where things would be moved around on their own.

A door leading to the mud room would lock on its own. There’s supposedly a playful spirit in Marian’s Room. Witnesses were awoken by an unseen entity bouncing on the bed. A towel lifted off the hook on to the floor. A light on the fireplace mantel turns itself on during the early morning hours.