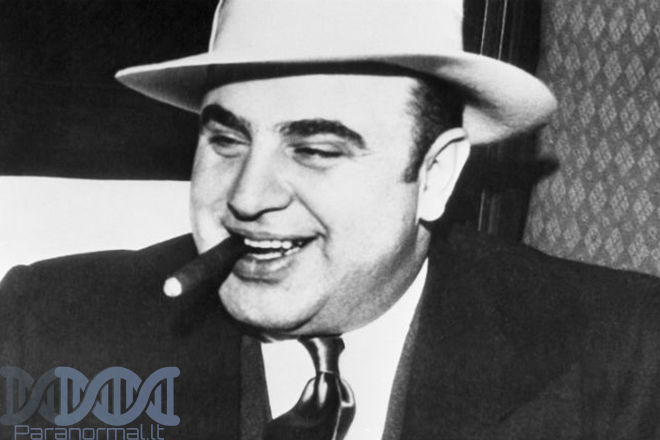 By the time Al Capone was in his late 20s, his bootlegging outfit was reportedly grossing about $100 million a year—more than $1 billion when adjusted for inflation. The crime boss had extravagant taste—spending his money on diamond jewelry, bespoke silk suits, banquet dinners, vintage champagne, a seven-ton armored car, heavy security detail, and a waterfront Miami Beach mansion. Because he would not invest his ill-begotten fortune—if he did, it could potentially have been seized by the government—Capone also dealt primarily in cash, even reportedly requesting that his silk suits be made with extra-large front trouser pockets to comfortably store his wads of $100 and $500 bills.

But how does one safeguard a mountain of cash while in prison? That was the dilemma the mob boss reportedly encountered in 1931, when Capone was sentenced to 11 years for tax evasion. According to Capone’s great-niece Deirdre Capone, her gangster relative went to elaborate lengths to hide “hundreds of millions of dollars.” But by the time Al Capone was released from prison, the mobster’s mind had decayed after contracting syphilis. Deirdre said Al could not remember his brother and business partner Ralph—Deirdre’s grandfather—let alone the whereabouts of his money.

“He was a beaten man,” Deirdre told Vanity Fair Monday of her great-uncle after his release from prison, alleging that doctors at Alcatraz treated Al with injections of mercury—the chemical that caused the Hatter in Alice’s Adventures in Wonderland to go, well, mad.

In her 2011 book Uncle Al Capone—The Untold Story From Inside His Family, Deirdre recalls a conversation her grandfather Ralph had with her.

“The worst part of [Al’s incarceration] was what it did to his memory,” Ralph told me. “That was catastrophic. It changed his life, my life, your life…. it changed all of our lives. Your uncle Al had an incredible amount of money, money he couldn’t put into a bank account or openly invest. He didn’t trust the stock market; he called it a ‘game.’ And he didn’t trust anyone enough, even me, to help take care of the money. So the main thing he did was get safe deposit boxes in various banks around this country and in Cuba, using assumed names.”

“There is a lot of money missing,” Deirdre told Vanity Fair, theorizing that her great-uncle stashed his fortune in safety-deposit boxes for a few years, expecting that he would receive the same three-year sentence Ralph had received. But Al was sentenced to 11 years. And because the mob boss had not trusted anyone else with details of his plan, and his memory disintegrated in prison, the money was as good as gone. Deirdre theorized that when payments stopped for the deposit boxes, and banks could not get ahold of their fictional owner, the banks “opened up these boxes to try to see who owns it.” In the case of the safety-deposit boxes in Cuba, Deirdre said, “If you find a bunch of American cash, no one’s going to turn that in.”

Deirdre also has a hunch that her great-uncle might have had some of his fortune exchanged into uncut diamonds. But she has no leads on their whereabouts—and has made her peace with that. Her great-uncle’s fortune “has never unearthed itself. I’m 80 years old right now,” laughed Deirdre. “My husband’s 85. I don’t care.”

Deirdre said she wants to channel her efforts, instead, on clearing the family name for her children, grandchildren, and great-grandchildren. She has already written a book, and hopes to collaborate on a film that would show a different side of her great-uncle. While she considers Tom Hardy “a wonderful, gifted actor,” Deirdre said she was never consulted for Capone. Based on the film’s trailer, Deirdre said, Hardy seems to be playing her great-uncle as “a monster.”