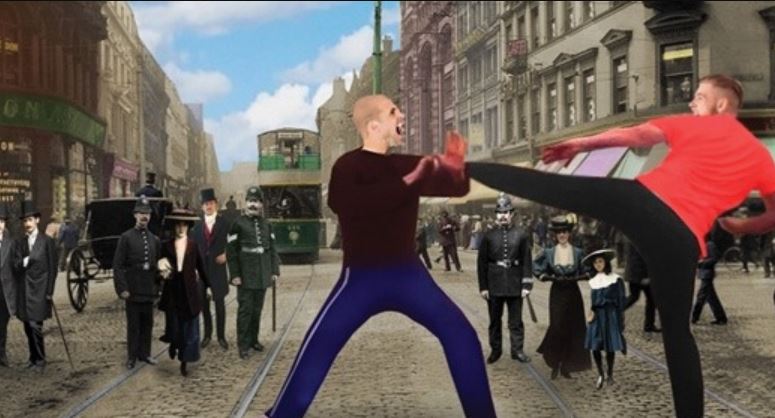 In 2014, Steve and Sean, two Huyton men in their mid-twenties, met at a gym and got talking. They soon realised they had a lot in common, supporting the same football club, both having a love of WWE, British Amateur Rugby League, and both men were also big Bruce Lee fans.
Steve and Sean were also very proficient in the martial arts – Steve being a red belt in Seiki Juku Karate, whereas Sean was a serious student of the military self-defence and fighting system Krav Maga (Hebrew for contact combat).

Whenever Sean got into a fight – a situation he always did his utmost to avoid – it was usually over in three seconds, such was his level of expertise in self-defence.

In the summer of 2014 Steve and Sean went to Magaluf for two weeks, and here the lads met a beautiful girl of 21 named Faye, and both of them fell for her. Faye really got on with Steve and Sean and couldn’t seem to decide who she wanted to go with, and after a long drinking session at a bar one night, Sean said to Steve, “We should fight for Faye, like a sort of joust, and the first one who gets put down has her.”

“You’re not serious,” replied Steve, “you actually think Faye is a thing to fight over? She’s a person; if she wants one of us she’ll let us know.”

“Have an arm-wrestle, big man,” said Sean, and he swiped their glasses and bottles off the bar counter to make space for the proposed round of skandenberg.

The barman picked up a cosh from under the bar, ready to deal with the drunken Sean, but a well-known arm wrestler in the drinking establishment nicknamed Iron Arm shouted to the barman, “Don’t señor! I know these two, and if you kick them off they’ll destroy this place, believe me.”

Iron Arm then calmed the men down and Sean went to his hotel room and was soon snoring. In the morning, Sean apologised to his friend and the rest of the holiday went well.

In December of that year, Steve was Christmas shopping in Liverpool One when he bumped into Faye. They chatted for a while and then Steve asked Faye if he could take her for a bite in the nearest eatery he could see, which was Nando’s, but Faye suggested a vegan bistro on Duke Street.

They went there and talked over the food and drink for an hour and a half, and then Steve and Faye went their separate ways – but not without arranging a date when they could get together again.

It looked like the beginning of something, but Steve wasn’t sure if it was just friendship or something else, and he played it casually and went slow for a change.

He never said anything to Sean about the date when he saw him at the gym on the following day, knowing his friend still harboured serious feelings towards Faye.

Steve went on the date with Faye and they ended up in the Cavern Quarter on Mathew Street on a Saturday night, and earlier on that day, Sean had said he was going out for a night on the town and had asked Steve if he wanted to come along.

Instead of telling the truth, Steve said he had to visit a sick relative.
Sean walked into the very pub where Steve and Faye were drinking that Saturday night, and as he came through the door, Steve just happened to go to the toilet.

Sean saw Faye standing there and tried to get her a drink, but she said she already had one, and when Sean saw that her drink was next to a barely-touched chalice glass of Stella Artois, he asked, “Oh, you with someone?”

“Yes,” said Faye, nervously, for Steve had informed her of the white lie he’d told Sean about visiting a sick relation, and the girl kept glancing at the door of the gents, expecting Steve to come out.

“Well, whoever he is, he’s a lucky sod,” said Sean, and then someone he knew tapped him on the shoulder and he got talking.

Faye walked towards the gents, pretending she was texting someone, and as soon as she saw Steve come out she told him Sean was there. Steve and Faye then darted through a gaggle of drinkers and left the pub.

They rode a hackney to the Baltic Triangle, and there things got romantically serious as the night progressed. Steve and Faye saw more and more of one another, and Faye said that on Valentine’s Day 2015, she’d move in with Steve at his house on Huyton’s Parbrook Road.

Sean still didn’t know Steve was dating Faye, and thought it was time to tell him. As chance would have it, the two men bumped into one another on Lord Street on Valentine’s Day, and when Steve said he was seeing Faye and that she was going to live with him, Sean said he was sly and Steve said he was under no obligation to tell him anything and the next thing he knew, Sean punched him, and the unexpected blow floored Steve.

There were high kicks and reverse punches as the men battled, when something very strange took place.

Steve noticed the crowd gathering around the fight looked very old fashioned, and then he saw trams coming up Lord Street.

Sean too then noticed the weird time shift, and all of a sudden, a huge policeman with a ‘handlebar’ moustache swung a truncheon at Sean, but he ducked and the cop fell over.

The backdated crowd cheered and laughed, and the two disoriented men ran off up Church Street, and they saw horse-drawn carts change into modern cars as they ran.

The men realised they had experienced a timeslip, and they grudgingly shook hands and talked about the unearthly experience in a pub.

Sean forgave Steve’s secrecy regarding Faye and was later the best man when his friend tied the knot with Faye.