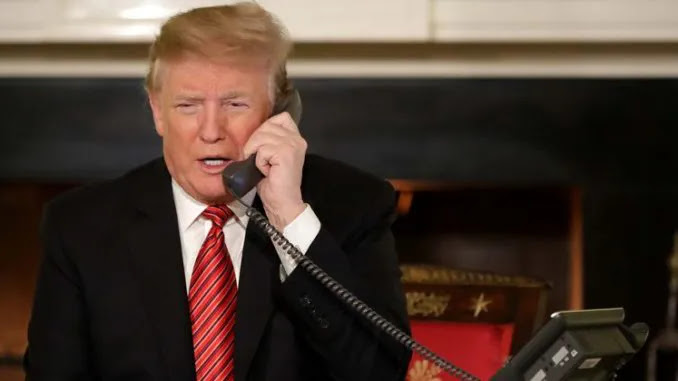 President Trump is not a fan of the ‘cancel culture’ and has dismissed it as ‘bulls**t’.

Trump was overheard when he was caught on speakerphone as he negotiated with a top GOP lawmaker to preserve the name of Confederate Gen. Robert E. Lee at a military installation on Wednesday night.

The Mail Online reports: The New York Times obtained audio of a Wednesday night call between Trump and Senate Armed Services Committee Chairman Jim Inhofe, as the Oklahoma Republican put a conversation with the president on speaker while he dined at a Capitol Hill restaurant.

All right, my friend,’ said Trump to Inhofe, 85. ‘Are you doing good? We’re going to keep the name of Robert E. Lee?’

I spoke to highly respected (Chairman) Senator @JimInhofe, who has informed me that he WILL NOT be changing the names of our great Military Bases and Forts, places from which we won two World Wars (and more!). Like me, Jim is not a believer in “Cancel Culture”.

Then Trump could be heard saying: ‘They don’t want cancel culture. People want to get back to life not this bulls**t.

So it’s very positive, I’ll bet you had a lot of good,’ Trump said before being drowned out by other noise in the restaurant.

‘Sure did, I appreciate it very much,’ Inhofe replied.

The senator was eating at Trattoria Alberto, a Capitol Hill Italian restaurant popular with Republicans.

Trump had tweeted a day after the Republican-led Senate had passed the $740.5 billion defense spending bill that included an amendment proposed by Sen. Elizabeth Warren to rename the bases still named for Confederate fighters.

The Senate bill had strong bipartisan support and passed 86-14.

The president had tweeted that Inhofe had told him that the 10 military bases named after Confederate figures would not be renamed.

‘I spoke to the highly respected (Chairman) Senator Jim Inhofe, who has informed me that he WILL NOT be changing the names of our great Military Bases and Forts, places from which we won two World Wars (and mores!),’ Trump wrote. ‘Like me, Jim is not a believer in ‘Cancel Culture.”

The bill’s companion in the House also passed and includes a provision to rename bases like North Carolina’s Fort Bragg, but gives the Defense Department a deadline of a year, instead of the three-year period outlined in the Senate amendment.

The provision to rename the bases could be pulled out in Conference Committee and Inhofe is one of the conferees, but with the measure’s broad bipartisan support that’s unlikely.

Trump first came out against the renaming of military bases that are named for Confederate figures on June 10, tweeting out a statement and then having White House press secretary Kayleigh McEnany hand it out to reporters and read it aloud.

‘These Monumental and very Powerful Bases have become part of a Great American Heritage, and a history of Winning, Victory, and Freedom,’ Trump tweeted.  ‘The United States of America trained and deployed our HEROES on these Hallowed Grounds, and won two World Wars.’

‘Therefore, my Administration will not even consider the renaming of these Magnificent and Fabled Military Installations,’ Trump said.