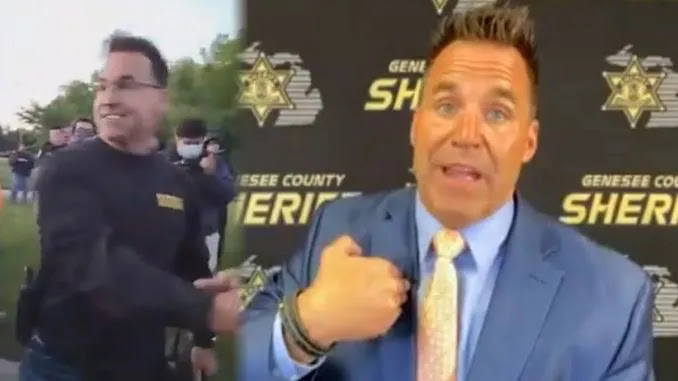 A teenage girl has been rescued from human trafficking after Genessee County Sheriff’s Office found her locked in a Michigan barn during their search for 27 children who have been declared missing and “off the grid.“

One 16-year-old girl was found locked in a barn in Montrose, Swanson said.

“The fear in her eyes was real,” he added.

It was the county’s third such rescue operation, Swanson said. The GHOST Team also conducted rescue sweeps in 2018 and 2019, he said.

The GHOST work was a partnership between many township and city police departments, as well as state police, the FBI, and a training group composed of ex-Navy SEALs, one of whom spoke on Friday.

Over the course of the sting operations, Swanson said that law enforcement made contact with 2,000 people who were seeking “sexual relations with vulnerable kids.”

“The ones that actually come (to meet the child), those are ones that are going to really harm,” he said.

In one case a 16-year-old girl was found locked in a barn in Montrose. The barn was surrounded by barbed wire and Sheriff Swanson said it appears as if the girl had been trafficked.

NBC25 reports: The man who is accused in this human trafficking incident has been arrested and is awaiting arraignment in the Genesee County Jail.

The discovery came amid a rescue operation that focused on wellness checks of at-risk kids ages 17 and under that had been reported by schools, courts or individuals as “off the grid.”

There had been six other operations that were stings that stretched from March through through mid-August.

Swanson says those involved decoys on social media talking with 2,000 people who were seeking sexual relations with teens ages 15 and under.

He says that that led to the arrest of 17 people who showed up in person to engage in the acts.

“So, it’s the promise of something better. If someone’s seeking love, they promise them love. If someone’s seeking shelter, they promise them shelter. Whatever it is, they groom them. It could happen at a school like this, or it could happen on the side of the road. So, that’s the sign you need to see. Who is lacking and who’s providing? And once they lock on, then they become property; and they become very possessive to the point where they see them as property, and they could kill them in a minute.“

Swanson says individuals who busted during the sting operations traveled from across the area, including who arrived at the meet-up spots with drugs and weapons.

Swanson said investigations are ongoing and that more information would soon emerge about the case involving the 16-year-old girl.