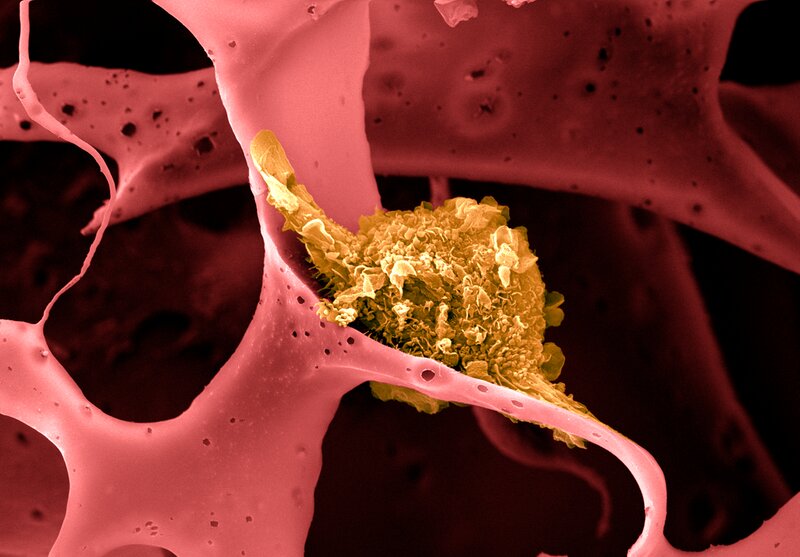 Patients with cancer have multiple treatment options available to them today, but each has its drawbacks. Chemotherapy kills rapidly dividing cancer cells, but it also damages healthy cells in the body and often does not effectively prevent tumor metastasis or disease recurrence. Immunotherapies avoid those problems by acting on a patient's immune system to generate a sustained anti-cancer response, but frequently have trouble accessing tumors due to the immunosuppressive local environment that tumors create.

Now, a new, best-of-both-worlds approach packages the cancer-killing power of chemotherapy and the long-term efficacy of immunotherapy into a biomaterial-based cancer vaccine that can be injected adjacent to a tumor site. When mice with aggressive triple-negative breast cancer (TNBC) were given the vaccine, 100% of them survived a subsequent injection of cancer cells without relapsing. This research is reported in Nature Communications.

"Triple-negative breast cancer does not stimulate strong responses from the immune system, and existing immunotherapies have failed to treat it. In our system, the immunotherapy attracts numerous immune cells to the tumor while the chemotherapy produces a large number of dead cancer cell fragments that the immune cells can pick up and use to generate an effective tumor-specific response," said co-first author Hua Wang, Ph.D., a former Postdoc and Technology Development Fellow at Harvard's Wyss Institute for Biologically Inspired Engineering and John A. Paulson School for Engineering and Applied Sciences (SEAS) who is now an Assistant Professor in the Department of Materials Science and Engineering at University of Illinois, Urbana-Champaign.

Personalized vaccines without the wait

First developed in 2009, the injectable cancer vaccine has shown great promise in treating multiple types of cancer in mice, and has been explored in clinical trials for treating melanoma at Dana Farber Cancer Institute. In the original formulation of the vaccine, molecules found in cancerous cells called tumor-associated antigens (TAAs) were incorporated together with adjuvants inside the aspirin-sized scaffold so that arriving dendritic cells could recognize them as "foreign" and mount an immune response targeted against the tumor. These TAAs can be isolated from harvested tumors or identified by sequencing the genome of cancerous cells and subsequently manufactured, but both of these processes to create personalized cancer vaccines can be long, tedious, and expensive.

The implantable cancer vaccine recruits the body’s own immune cells and exposes them to antigens from a patient’s cancer cells, triggering an immune response against the tumor. Credit: Wyss Institute at Harvard University

"One of the critical limiting factors in the development of cancer vaccines is the selection of TAAs, because currently we only have a very small library of known antigens for a few specific tumor cell lines, and it's difficult to predict which can mount an effective immune response," said co-first author Alex Najibi, a graduate student in the lab of Wyss Core Faculty member David Mooney. "Implanting chemotherapy drugs inside the vaccine scaffold creates a burst of cancer cell death that releases TAAs directly from the tumor to the dendritic cells, bypassing the long and costly antigen development process."

Wang, Najibi, and their colleagues set out to apply this new cancer vaccine tactic to TNBC, a disease in which the tumors aggressively suppress immune activity in their local area, limiting the efficacy of immunotherapy. The team first loaded their alginate hydrogel scaffold with a protein molecule called Granulocyte-Macrophage Colony Stimulating Factor (GM-CSF). GM-CSF stimulates the development and concentration of dendritic cells, which take up antigens from tumors and other invaders and present them to T cells in the lymph nodes and spleen to initiate an immune response. They also added the chemotherapy drug doxorubicin (Dox) attached to a peptide called iRGD. iRGD is known to penetrate tumors, and helps target the Dox to tumors upon release.

When mice with TNBC tumors were injected with the new vaccine, those that received a scaffold loaded with GM-CSF and the Dox-iRGD conjugate showed significantly better penetration of the drug into tumors, increased cancer cell death, and fewer metastatic tumors in the lungs than those that received gels containing Dox conjugated to a scrambled peptide molecule, unmodified Dox, or were untreated. Analysis of the scaffolds showed that they had accumulated a large number of dendritic cells, indicating that both the immunotherapy and chemotherapy components of the vaccine were active.

Encouraged by these results, the team then experimented with adding a third component to the vaccine called CpG, a synthetic bacterial DNA sequence that is known to enhance immune responses. Mice that received vaccines with this addition displayed significantly slower tumor growth and longer survival times than mice that received vaccines without it. To evaluate the strength and specificity of the immune response generated by this three-part vaccine, the researchers extracted and analyzed cells from the animals' lymph nodes and spleens. Strikingly, 14% of the T cells taken from lymph nodes reacted against the tumor cells, indicating that they had been "trained" by the dendritic cells to target the cancer, compared with only 5.3% of the mice that received the two-part vaccine and 2.4% of the T cells from untreated mice. In addition, giving a "booster" dose of the vaccine 12 days post-injection increased their survival time even further. 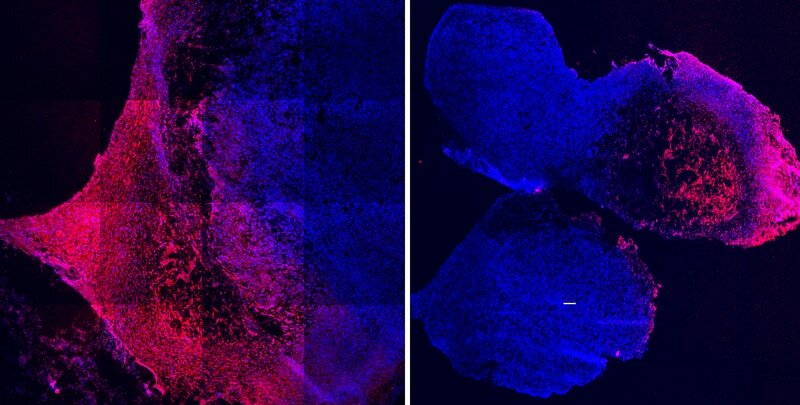 When the chemotherapy doxorubicin (red) was bound to the tumor-infiltrating molecule iRGD, it effectively infiltrated triple-negative breast cancer tumors (blue) to attack them (left). Dox without this modification remained mostly within the hydrogel and did not migrate into the tumors (right). Credit: Wyss Institute at Harvard University

While these results revealed the vaccine's effect on activating the immune system, the team also wanted to understand how it affected the local tumor microenvironment. Analysis of the vaccines and their nearby tumors revealed that cells in tumors treated with gels containing GM-CSF, Dox-iRGD, and CpG had an increased amount of the protein calreticulin on their surfaces, which is an indicator of cell death. Mice that received the three-part vaccine also displayed higher numbers of pro-inflammatory macrophages: white blood cells that are associated with improved anticancer activity and longer survival.

The researchers also discovered that their treatment caused an increase in the expression of the cell-surface protein PD-L1 on tumor cells, which is used by cancer to evade immune detection. They had a hunch that co-administering an anti-PD-1 checkpoint inhibitor treatment that blocks this immune evasion with their vaccine would increase its effectiveness. They implanted the three-part vaccine into mice, then injected anti-PD-1 separately. Mice treated with the combination of gel vaccine and anti-PD-1 showed significantly reduced tumor size and number, and survived for a median of 40 days compared to 27 days for untreated mice and 28 days for mice that received anti-PD-1 alone. This synergy suggested that the vaccine might best be used in combination with checkpoint inhibitor therapies.

To imitate how the cancer vaccine might be administered to human patients, the team tested its ability to prevent cancer recurrence after a primary tumor is removed. They surgically excised TNBC tumors from mice, then injected either their three-part hydrogel vaccine or a liquid vaccine containing all the components in a suspension near the original tumor site. Both treated groups had significantly lower tumor recurrence, but the gel vaccine produced significantly slower tumor growth and improved survival. Mice were then re-challenged with an injection of cancer cells and, strikingly, 100% of the mice that had received the gel vaccine survived with no metastasis, while all of the untreated mice succumbed to the disease.

"The ability of this vaccine to elicit potent immune responses without requiring the identification of patient-specific antigens is a major advantage, as is the ability of local chemotherapy delivery to bypass the severe side effects of systemic chemotherapy, the only treatment currently available for the disease," said corresponding author Mooney, Ph.D., who leads the Immuno-Materials platform at the Wyss Institute and is also the Robert P. Pinkas Family Professor of Bioengineering at SEAS. "Not only does this vaccine activate dendritic cells with tumor-specific TAAs in situ, it also reshapes the tumor microenvironment to allow the immune system greater access to the tumor, and creates an immune memory that prevents further recurrences."

The team is continuing to explore the combination of chemotherapy with cancer vaccines, and hopes to improve their antitumor efficacy for other difficult-to-treat tumor models. The team hopes that future studies to better understand and optimize the system will allow it to move into preclinical trials and, eventually, human patients.

"The team's newest version of their cancer vaccine is a novel multifunctional anticancer therapy that offers new hope for the treatment of a wide range of cancers. It is essentially an entirely new form of combination chemotherapy that can be administered through a single injection and potentially offer greater efficacy with much lower toxicity than conventional treatments used today," said Wyss Institute Founding Director Don Ingber, M.D., Ph.D. Ingber is also the Judah Folkman Professor of Vascular Biology at Harvard Medical School and the Vascular Biology Program at Boston Children's Hospital, as well as Professor of Bioengineering at SEAS.