Moore was one of the foremost UFO-sceptics 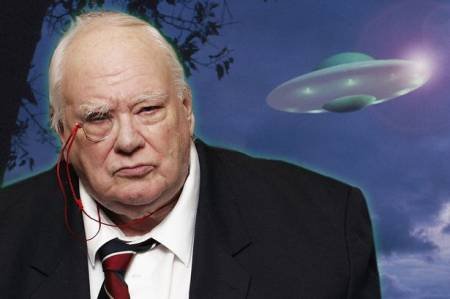 Moore and his film crew reportedly watched an  orange glow that developed into a low-flying 'craft' which no-one could explain.

Legendary astronomer Patrick Moore saw a UFO being filmed while making a documentary during the 1960s - but the BBC edited out, it has been claimed.

celebrations of the 'Warminster Thing' in 1965.

That year people living in the town began reporting a large number of strange noises and paranormal sightings.

Mr Lyons revealed a story from a the local reporter called Arthur Shuttlewood, who broke the original story about the bizarre sightings which made the town a mecca for UFO spotters.

Mr Shuttlewood spoke to Sir Patrick - a well known UFO-sceptic - on January 31 1969 when he spent the evening star gazing with his film crew, the Daily Express reports.

Mr Shuttleood wrote that Sir Patrick and his crew spotted something they couldn't explain and that some of their watches stopped when they arrived at the site.

He wrote: "Just after a satellite arced from north to south, the attention of a camera man was drawn to an orange glow that developed into an ellipsoidal craft flying low in the opposite direction to the satellite.

"It then flared into a glowing brilliance as it glided unerringly and silently towards the darkened copse saddling Cradle Hill."

Mr Shuttlewood wrote: "There was no doubting the reality of his being wholly mystified and the producer later sent me a letter thanking me for giving them 'an unforgettable and wonderful experience'."

The reporter later claimed the final cut of the BBC documentary made by Sir Patrick had not shown his shock at what he saw or the actual footage.

A BBC Spokesperson said: "We have a lot of things in the BBC archive but no aliens or flying saucers."