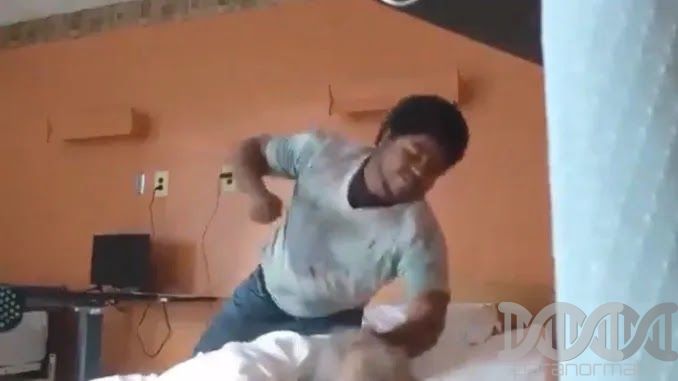 There were a total of three videos on Bitchute showing the deranged lunatic beating these helpless elderly folk until they were bleeding.

This is a nursing home. Please someone explain why this is happening and unreported. pic.twitter.com/Dzs8QYykIv

“This was also posted on my Twitter feed and Judicial Watch contacted authorities who then, in response to our concern, arrested this person. Thanks to those who helped us get this done.” Tom Fitton said.

This was also posted on my @Twitter feed and @JudicialWatch contacted authorities who then, in response to our concern, arrested this person. Thanks to those who helped us get this done. https://t.co/zER9GCWVK4

Tom Fitton said according to his sources, the man was arrested.

On Friday FOX 2 Detroit in Michigan spoke with the father of the Jaydon Hayden after his arrest.

The father said his son is not vicious, but that he just has mental health issues.

And the father then said this, “He said his son called 911 and was taken to a mental health facility in Ann Arbor. Last Wednesday, he was diagnosed with COVID-19 and said he was supposed to be taken to another facility to be quarantined.

Did you get that?

Authorities — following the orders of Governor Gretchen Whitmer — moved the young man to a nursing home to recover from COVID-19.

According to his father, Jaydon Hayden was moved to the nursing home because he had COVID-19.

This tells us that Governor Whitmer is STILL sending COVID-19 patients to NURSING HOMES.

So not only was Jayden BEATING nursing home patients but he was spreading the coronavirus in the same nursing home.

The Attorney for the Westwood Nursing Center says they were not aware of the beating until they saw the video?

The attorney added that Jayden was not a long-term resident.

According to WXYZ.com the 75-year-old victim is a US veteran.

And according to WXYZ Jaydon was moved the hospital last Wednesday.

The assault on the elderly man took place LAST FRIDAY!

And police did not arrest Jaydon until yesterday — a week later — at that same nursing home!

Jaydon Hayden beat the hell out of the seniors and was still in the facility a week later!

This was the result of #Whitmer forcing Covid+ patients into Nursing Homes https://t.co/3e3bJKYqJS