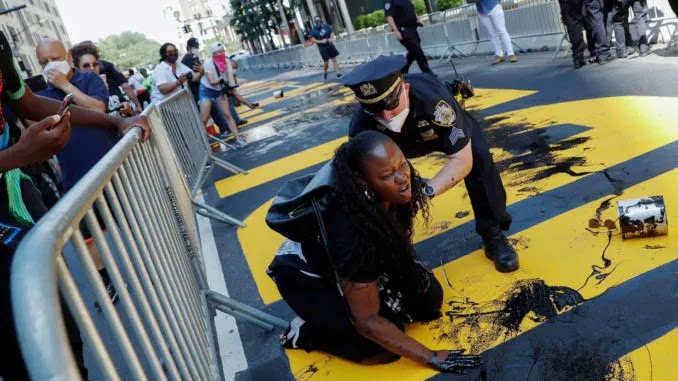 Christian activist Bevelyn Beatty was dragged away by police after throwing a tin of paint on the ‘Black Lives Matter’ mural in front of Trump Tower on New York’s Fifth Avenue.

Activists have been dumping paint over the controversial mural all week and say they intend to continue because ‘BLM is a marxist movement’.

RT reports: Bevelyn Beatty is a black, conservative, Christian activist, and is no stranger to controversy. She’s taken to the streets in Seattle to blast protesters and supporters of Joe Biden, she’s been handcuffed for protesting outside Planned Parenthood in New York, and arrested for disrupting a city council meeting on face masks in Florida just two weeks ago.

Beatty was in New York on Saturday, this time targeting the gigantic, yellow ‘Black Lives Matter’ mural put down on Fifth Avenue by Mayor Bill de Blasio last week. Beatty strode out onto the mural, spilled a tin of black paint over the letters, and chanted “Jesus matters” and “refund the police.”

As police officers closed in on her, Beatty dropped to her knees to spread the paint over the letters, as bystanders swore at her. “We all will never support Black Lives Matter,” she shouted, as an officer slipped in the paint puddle and ended up on the floor.

Someone painted over the Black Lives Matter graffiti in front of Trump Tower AGAIN today.

The activists are calling it #OperationPaintDrop & say they're going keep doing it every day because BLM is a Marxist movement.

This is the third time this week. pic.twitter.com/KSP9tt1zXp

Beatty and another woman were arrested, according to NBC News.

Beatty was not the first activist to take issue with the mural. In fact, she is at least the third this week. Two people were arrested on Friday for sloshing blue paint across the letters, with the activists shouting “all lives matter” and the pro-police “blue lives matter.” On Twitter, would-be paint throwers using the hashtag ‘#OperationPaintDrop’ vowed to vandalize the mural every day until de Blasio removes it. Some called ‘Black Lives Matter’ a Marxist organization.

Controversy has dogged the mural since its installation. President Donald Trump, whose Trump Tower stands on the same street, said that de Blasio’s decision made police “furious.” The police officers actually guarding the mural are reportedly angry that they’ve been assigned to “babysit paint,” amid a citywide spike in crime.