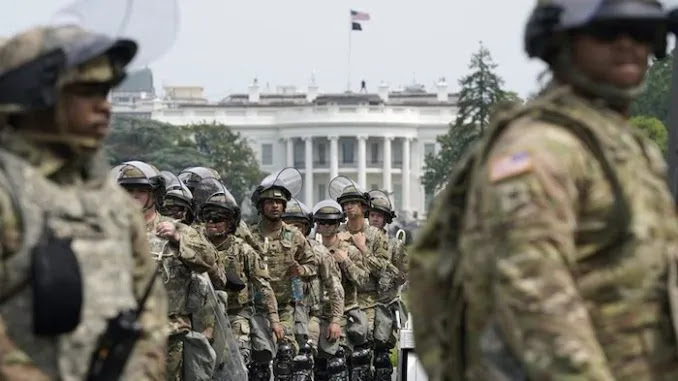 (Paranormal) Just days before the Biden inauguration, the nation’s capitol has been transofmred into a military zone like Baghdad.

Bridges into D.C. from neighboring Virginia are to be closed in the coming days, shortly before the inaugural.

Another report on checkpoints to leave D.C., “A friend just called me from his car in DC, he was dropping his wife off at her office in NW. They had to go through an Armed Checkpoint to enter the city! Leaving the city, he had to stop at another Armed Checkpoint.

He was required to show his ID. #UnlikeAnElection”

Video of driving through a checkpoint manned by Guard troops:

Four of the main bridges in and out of D.C. from Virginia will be closed for 48 hours around the inauguration. Two bridges from Virginia to D.C. are not set to be closed: Key Bridge from Rosslyn to Georgetown and Chain Bridge from McLean to Canal Rd. near the Palisades neighborhood.

The Secret Service posted a detailed list on Thursday of the streets blockaded by military checkpoints and divided into a Green Zone and Red Zone.

“Green Zone – Vehicle Restricted Zone Vehicle traffic restricted to residents or businesses within the restricted area and National Guard Personnel will be assisting with verifying traffic entering into the Green Zone.”

Extra checks are in place for those flying to D.C., “Extra security for flights coming into DC: I boarded a flight from LGA to DC a moment ago. At the gate, a TSA agent checked (again) all passenger IDs against boarding passes. Homeland Security officer w/ a dog was standing beside the door and said, Yes, this is for inauguration.”

These restrictions and security checkpoints are supposed to be temporary–just for the inauguration.