Democrat Rep Vows to Prosecute Trump for ‘Crimes Against USA’ 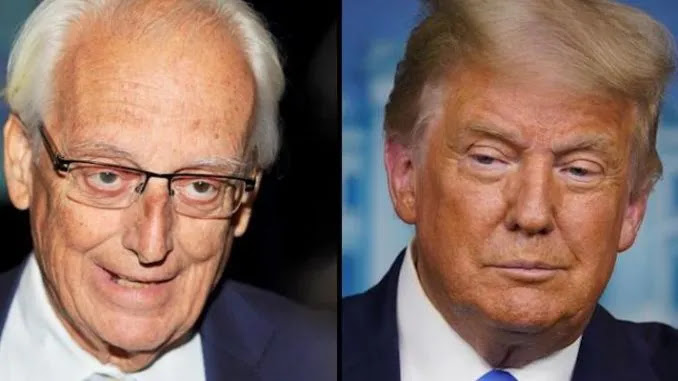 Democrat Rep. Bill Pascrell Jr. is calling for President Trump to be tried for “crimes against the United States” as soon as he “leaves office.”

Rep. Pascrell Jr. (D-NJ) says he wants Donald Trump and members of his administration to be fully investigated and prosecuted by the Department of Justice (DOJ).

Although the election has yet to be concluded, Pascrell thinks the DOJ should initiate their investigation as soon as “President-elect Joe Biden” is “inaugurated.” 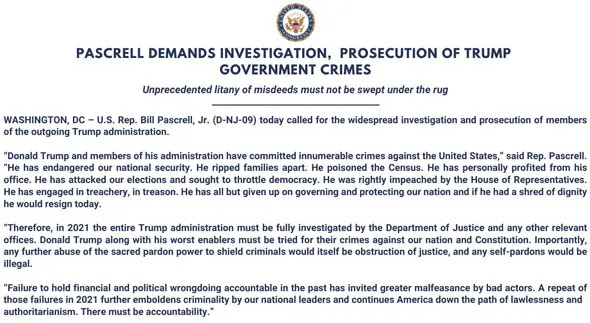 “He has endangered our national security,” Pascrell’s statement reads.

“He ripped families apart. He poisoned the Census.“

“He has personally profited from his office,” Pascrell added.

“He has attacked our elections and sought to throttle democracy.“

“He was rightly impeached by the House of Representatives.“

“He has engaged in treachery, in treason.“

“He has all but given up on governing and protecting our nation and if he had a shred of dignity he would resign today.”

Foxnews.com reports: Pascrell also said that any attempt by Trump to use the president’s pardoning powers to aide his staff would be an “obstruction of justice” and the question surrounding his ability to self-pardon would be “illegal.”

The New Jersey congressman could not be reached to confirm whether or not other members of congress have said they support his measure, but Trump ally Rep. Matt Gaetz, R-Fla., condemned the move Thursday, calling it “disgusting.”

“This is now the Left’s goal – throw President Trump, his administration officials, his family and his supporters in prison,” Gaetz wrote on twitter. “This is where we are now. Disgusting.”

Pascrell, like Trump, has relied heavily on twitter to attack his opponents, calling the president a “crybaby” in a Thursday tweet to condemn Trump’s recent actions involving vote verification in Michigan.

The New Jersey congressman, who serves on the House Ways and Means Committee and has led the effort to obtain Trump’s tax returns, said the failure to investigate the president and his administration “further emboldens criminality by our national leaders and continues America down the path of lawlessness and authoritarianism.”

“There must be accountability,” he added.