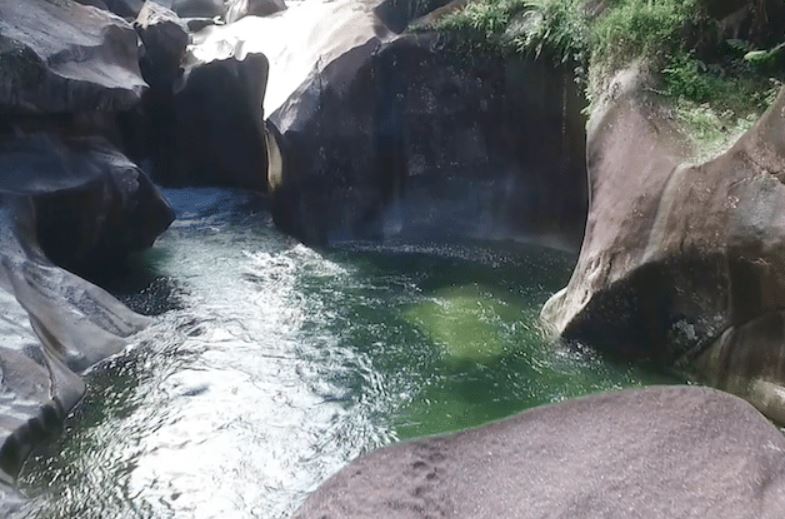 The crystal waters of Babinda Creek, south of Cairns in Far North Queensland, flow from the state’s highest mountain Mt Bartle Frere down through the steamy rainforest to the Great Barrier Reef Coast, reports weirdaustralia.com.

On their way, the waters flow into a waterhole known as Babinda Boulders, an idyllic setting and favourite tourist attraction.

The innocuous-sounding Babinda Boulders, however, is better known by another name … the much more sinister-sounding Devil’s Pool. And for very good reason too.

A real thrill upon visiting the Boulders

In The Cairns Post of Friday 2nd August 1940, a column titled Current Nature Topics promoted Babinda Boulders: “Those in search of little-known beauty spots will receive a real thrill upon visiting ‘The Boulders,’ on Babinda Creek.”

The correspondent went on to describe ‘The Boulders’: “The junction of three streams affords a particularly fine sight, where these tumble down over boulders and through chinks and crevices into a moderate-sized pool, out of which a most unusual course is taken.

Over a much water-worn granite bed the stream suddenly surges between giant boulders to disappear in a foaming torrent some fifty feet or so below, the whole process of which can be observed by standing on the rocky platform above and peering through the chinks between the rocks.”

To the local Aboriginal community Babinda (meaning water flowing over rocks) is sacred ground. It is the site of a Dreaming legend, the tragic love story of beautiful young Oolana and a handsome young man from another tribe.

Oolana is chosen to marry the well-respected tribal Elder Waroonoo. After the pair are married, another tribe wanders into their valley and Oolana falls in love with a handsome young man from the visiting tribe. His name is Dyga. As their forbidden love blossoms, Oolana and Dyga run away together. When the two tribes learn of their disappearance, they go in search of them…they find the couple at Babinda Boulders.

The lovers are soon captured by members of their respective tribes. As Dyga is dragged away, Oolana breaks free of her captors and, knowing she will never be with her true love ever again, throws herself into the deep waterhole.

Today, it appears that Oolana is still searching for her lost love, luring young men to their deaths in the icy waters of the Devil’s Pool.

The mysterious deaths of young men at Devil’s Pool

A plaque erected near Devil’s Pool reads: “He came for a visit and stayed forever.” This is a fitting tribute.

Since 1959, 17 young people have lost their lives in the waters of Devil’s Pool. Of these 17 deaths (some sources put the tragic toll higher) all but one have been young men.

While reckless behaviour and treacherous currents may account for a number of drownings in the one location, the high number of deaths of young males in this one swimming hole seems rather extraordinary. Especially when you consider that not all the victims were actually swimming in the water at the time of their untimely demise.

In one instance, a young couple stood together on the rock platform admiring the view when, according to one witness, without warning the waters suddenly rose, sweeping both into the water.

While the girl was lucky to survive, unfortunately, her male companion did not. The witness, a local visiting the pool, had snapped a photo of the pair as they stood on the rock high above the water’s edge just moments earlier.

In another case told to the Brisbane Times by long-time SES (State Emergency Service) member Dulcie Schnitzerling, 24 year old Peter McGann died at the pool in 1979 when he “jumped across the short space between the rocks, slipped and went missing”.

The last recorded death at the Devil’s Pool was that of Tasmanian Naval Seaman James Bennett in 2009. Other recent victims include an Adelaide tourist and a businessman from Sydney in 2006. It appears that visitors, rather than locals, fall victim to the seemingly cursed pool.

Reports of deaths at Devil’s Pool go back long before 1959 however.

The Cairns Post on Saturday 10th June 1933 included the following report titled Search Proceeding: “Although it is practically a week since the unfortunate man, Mr. T. Winterbottom, was swept over the Barron Falls, and all likely places have been searched, the body has not yet been located.

It is problematical as to where the body can be, as the first pool under the falls proper is of a tremendous depth, and, perhaps the body may be lodged in crevices or caves which may exist beneath this water.

Again, the body may be lodged in one of the crevices under the second pool. The search is being continued, and a further search of the Devil’s Pool will be made.”

And again in The Cairns Post, this time on 18th November 1940, Inquest at Atherton, “The tragic story of the eight year old child, John Dominic English who was drowned in the Devil’s Pool last Sunday was retold in the Police Court at Atherton…”

There are bound to be many others.

According to local Aboriginals, if you disrespect the sacred site, the site will disrespect you. This appears to be illustrated by the story of one such young man who was seen by others showing his disrespect by kicking the plaque that commemorates those who have lost their lives at the pool. As he kicked the plaque, he slipped, fell into the pool and drowned.

In an attempt to end the seemingly high incidence of drowning deaths occurring at the waterhole, the Cairns Regional Council introduced a No Go Zone and erected a number of warning signs to discourage daredevil swimmers.

Cairns Mayor Val Schier said, “There have been 17 deaths recorded at Devil’s Pool, with the most recent occurring in 2008. The aim of this No Go Zone is to prevent further incidents.”

Perhaps a less sensible suggestion to end the deaths, and one which obviously would have failed to respect the sacred site, was considered by some locals a few years back. Their plan was to blast the Devil’s Pool with dynamite and turn the whole area into rubble.

Luckily, that was never attempted. Who knows what fate would’ve awaited anyone trying to carry out such an act of destruction of such a sacred site?

As if 17 deaths of mostly young men in just over 50 years at Devil’s Pool isn’t mysterious enough, several photos have surfaced apparently showing ghostly images staring from the waters of Devil’s Pool.

The Brisbane Times reported on such a photo taken by one victim’s father at the site where his body was found. It appears to show the victim’s face in the water.

“When the father came down, the police took him out and showed him where he went down. And he took the photo of that. And he came back and they showed him where they had him tied up there. And when he went over to Innisfail the next morning to get them developed, that’s what they found. That photo, he’s even got the cigarette in his mouth.”

So, what are we to make of this mysterious waterhole and the apparent high number of deaths? Is the lovelorn spirit of Oolana really luring young men to their deaths in the icy waters of Devil’s Pool? Can a place really have negative or evil energy that is capable of killing? Or, are the high number of deaths not really that unusual for such a dangerous waterhole and was the Dreaming legend of Oolana and Dyga meant as a warning for locals not to risk swimming in the treacherous waters of Devil’s Pool?