CONTACT The Legend Of The Red Ghost Of Arizona 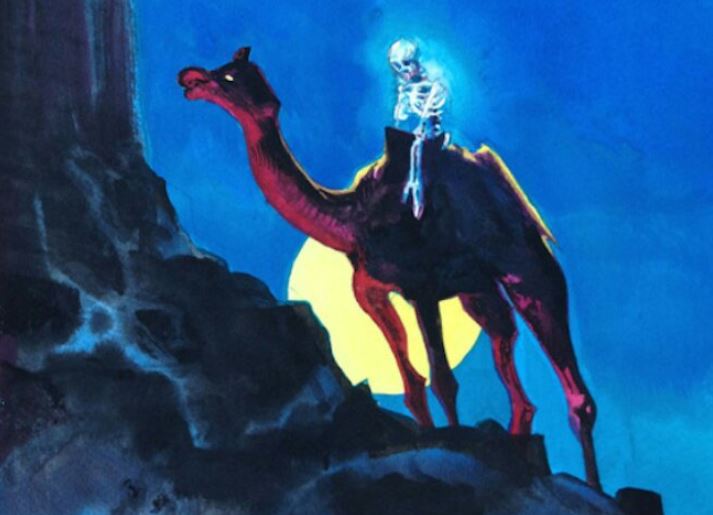 Most folks will tell you camels are not found in Arizona’s high country. Truth is, those adaptable beasts can thrive in just about any kind of terrain.

The U.S. Army introduced camels to the Southwest back in the 1850s, using them as beasts of the burden while surveying a road across northern Arizona. But, the Civil War interrupted the great camel experiment, and most of the homely critters were sold at auction. A few were turned loose to run wild—and therein lies the basis for the legend of Red Ghost.

The story begins back in 1883 at a lonely ranch near Eagle Creek in southeastern Arizona. The Apache wars were drawing to a close. However, a few renegade bands were on the prowl, keeping isolated ranches in a constant state of siege.

Early one morning, two men rode out to check on the livestock leaving their wives at the ranch with the children. About midmorning, one of the women went down to the spring to fetch a bucket of water while the other remained in the house with the children.

Suddenly one of the dogs began to bark ferociously. The woman inside the house heard a terrifying scream. Looking out the window, she saw a huge, reddish-hued beast run by with a devilish-looking creature strapped on its back.

The frightened woman barricaded herself in the house and waited anxiously for the men to return. That night they found the body of the other woman, trampled to death. Next day tracks were found, cloven hoof prints much larger than those of a horse, along with long strands of reddish hair.

A few days later, a party of prospectors near Clifton were awakened by the sound of thundering hoofs and ear-piercing screams. Their tent collapsed, and the men clawed their way out of the tangle just in time to see a gigantic creature run off in the moonlight. The next day, they too, found huge clovenhoof prints and long, red strands of hair clinging to the brush.

Naturally, these stories grew and were embellished by local raconteurs. One man claimed he saw the beast kill and eat a grizzly bear. Another insisted he had chased the Red Ghost, only to have it disappear before his eyes.

A few months after the incident with the miners, Cyrus Hamblin, a rancher on the Salt River, rode up on the animal while rounding up cows. Hamblin recognized the beast as a camel, with something tied to its back that resembled the skeleton of a man. Although Hamblin had a reputation as an honest man and one not given to tall tales, many refused to believe his story.

Several weeks later, over on the Verde River, the camel was spotted again, this time by another group of prospectors. They, too, saw something attached to the animal’s back. Grabbing their weapons they fired at the camel but missed.

The animal bolted and ran, causing a piece of the strange object to fall to the ground. What the miners saw made the hair bristle on their necks. On the ground lay a human skull with some parts of flesh and hair still attached.

A few days later, the Red Ghost struck again. This time the victims’ were teamsters camped beside a lonely road. They said they were awakened in the middle of the night by a loud scream.

According to the terrified drivers, a creature at least 30-feet-tall knocked over two freight wagons and generally raised hell with the camp. The men ran for their lives and hid in the brush. Returning the next day, they found cloven-hoof prints and red strands of hair.

About a year later, a cowboy near Phoenix came upon the Red Ghost eating grass in a corral. Traditionally, cowboys have been unable to resist the temptation to rope anything that wears hair, and this fellow was no exception. He built a fast loop in his rope and tossed it over the camel’s head.

Suddenly the angry beast turned and charged. The cowboy’s horse tried to dodge, but to no avail. Horse and rider went down, and as the camel galloped off in a cloud of dust, the astonished cowboy recognized the skeletal remains of a man lashed to its back.

During the next few years, stories of the Red Ghost grew to legendary proportions. The creature made its last appear­ance nine years later in eastern Arizona. A rancher awoke one morning and saw the huge animal casually grazing in his garden.

He drew a careful bead with his trusty Winchester and dropped the beast with one shot. An examination of the corpse convinced all that this was indeed the fabled Red Ghost.

The animal’s back was heavily scarred from rawhide strips that had been used to tie down the body of a man. Some of the leather strands had cut into the camel’s flesh. But how the human body came to be attached to the back of the camel remains a cruel mystery.

Excerpt from Arizoniana by Marshall Trimble, the state’s official historian