The Legend Of The Ghost Hound Of Lyme Regis 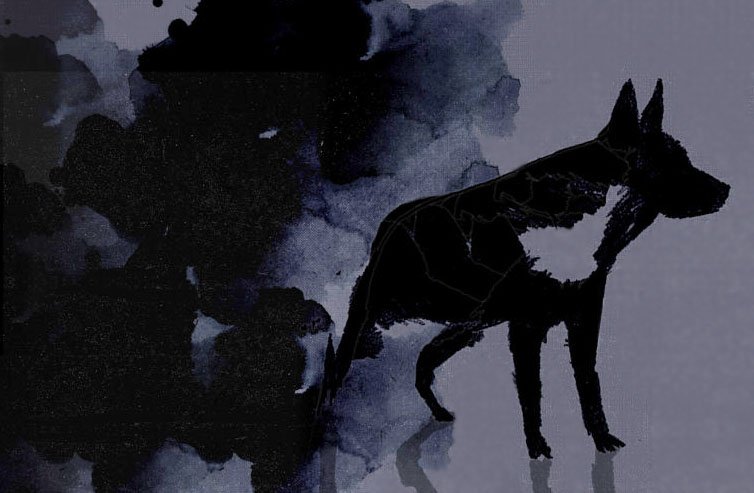 Near the town of Lyme Regis in Dorset, England, there is a farmhouse. The farmhouse is all that is left of an old mansion, Colway Manor, most of which was destroyed in the English Civil Wars.

The sitting room, however, still has the fireplace from the Manor. It was built in the old grand style and has a nook (alcove) with seats facing each other in the large chimney snug either side of the fire.

The seats are very inviting, for when the fire is alight they are very cozy and warm. Over the years they have been a place to relax for many a weary farmer… Oh, and one very strange occupant indeed…

Back in the 17th century, a lonely old man lived in the Manor House. His only companion was his loyal black hound. One night, as he was on his way to bed, thieves broke into the house.

They dragged the old man into a room and demanded he show them where had hidden his valuables. The man refused and, in their anger, they beat the old man until he was dead. The dog was left at the foot of the stairs. Here he pined for his master, until he too died of starvation.

Soon after, during the English Civil war, the mansion house was nearly destroyed. By the 18th century, the remains had been altered into a farmhouse. One day, the master of the house was sitting on one of the seats in the snug, as was his habit after a hard day’s work.

When suddenly, a large black hound appeared in the seat opposite him. At first, the farmer was very alarmed by the eerie black dog, which was clearly not of this world.

The dog seemed to cast a shadow of gloom over the room and the farmer no longer enjoyed his evening’s relaxation. After this night, the dog would often appear and the farmer became used to his regular visits.

The dog was never aggressive and would always sit in the same seat opposite the owner. The farmer began to look on the ghostly hound as one of the family. Its visits went on for several months.

He talked about his strange visitor with neighbors, but they advised him to be rid of it. “It will bode you no good,” they said. The farmer could not see what harm it was doing. Besides, if the truth were known, he was a little worried about what would happen if he were to upset the hound.

He replied jokingly: “Why should I be rid of him? He costs me nothing and is the quietest creature at the farm, not eating, drinking, nor interfering with anyone.”

However, his neighbors continued to worry about the eerie beast and mocked the farmer about his strange ‘pet’. One evening, the farmer had been drinking heavily and got so fed up with their mockery that he stormed off back home to tackle the beast.

By the time he got home, he was in a terrible state of rage. Why he thought, should this hound bother me so? As he entered the room he found the dog sitting in its usual place upon the chimney seat.

In his anger, the farmer took a poker and lunged at the dog. The dog quickly jumped off the seat and fled through the house, chased by the angry farmer. Finally, it ran up into an attic where it could not escape but, to the farmer’s surprise, it jumped through the ceiling and disappeared.

Angry and not believing his eyes, the farmer struck the ceiling with his poker. Part of the ceiling collapsed and an old box fell from its hiding-hole and landed by the farmer’s feet. 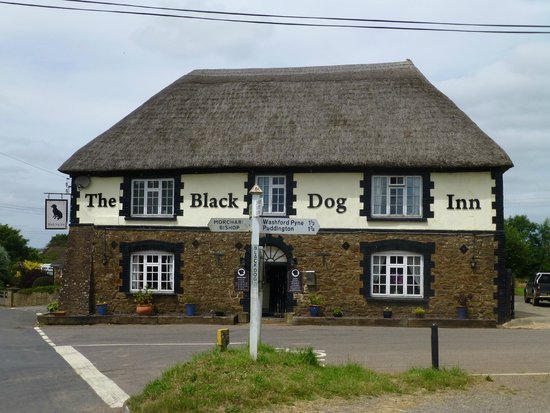 The farmer bent down and picked up the box. Inside were a great number of gold and silver coins from the reign of Charles I: a fortune indeed! With his newfound wealth, the farmer decided to buy a house, not far away, on the Dorset and Devon border. He turned it into a coaching inn and, in memory of his ghostly companion, he named it ‘The Black Dog.’

This building still remains at Uplyme, where it was once well known as the first pub in Devon. It closed in the 1990s. It is now a small guest house. As for the dog, it stopped haunting the farmhouse at Lyme Regis. But the animal could not rest and took to haunting Haye Lane, near to the ‘Black Dog Inn’, which became known as ‘Dog Lane.’

It is said that when the dog appears, usually at midnight, the air turns gloomy, cold and misty. It was last seen, by three tourists, in 1959. And there are still some who warn you not to let your dog stray around the area, as many seem to disappear in mysterious circumstances. The Black Dog, say locals, terrifies them to death.