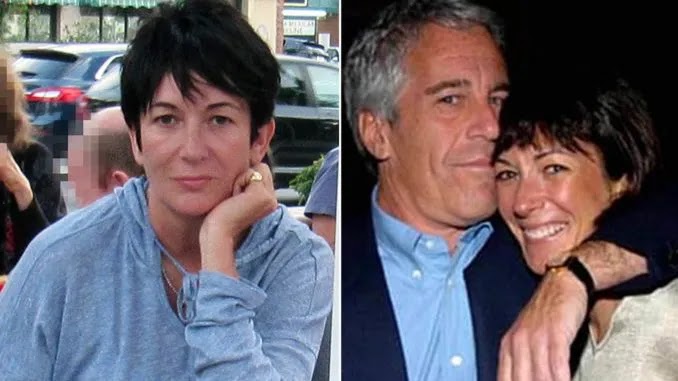 Ghislaine Maxwell may be “untouchable” under a 2008 agreement with Jeffrey Epstein according to the Executive Director of Alliance To Rescue Victims of Trafficking.

Conchita Sarnoff says that Maxwell is covered under the immunity clause within the non-prosecution agreement and added that the deal was a federal not a state agreement.

There are now fears tha Epstein’s alleged madam could avoid justice by using the controversial plea deal the pedophile cooked up with prosecutors over a decade ago.

On July 10th Maxwell asked to be released on $5 million bail.

The Sun reports: An unnamed source told the Daily Mail that Maxwell had “anticipated” her arrest following Epstein’s death last year, and her legal team have been preparing for “the last year”, declaring “this is war”.

Among her team’s likely defence arsenal is the Epstein plea deal, where he admitted two charges of child prostitution in exchange for a light sentence.

As a result he ended up serving just 13 months in jail and was involved in a work-release programme.

The agreement also granted immunity to protect others in his close-knit circle.

“That deal offered immunity to any potential co-conspirators of Epstein [and] could be Maxwell’s get-out-of-jail-free card,” the source added.

AP said last week that while her legal team was bound to raise the deal, it only applies in Florida.

The news agency explains that after a Miami Herald expose brought new attention to the case, the US attorney in Manhattan brought new charges against Epstein last July.

It was argued that the 2008 deal only applied to the specific US attorney’s office in Florida that made the agreement — not all 94 federal prosecutor’s offices in the country.

Key for Maxwell is that the agreement also sought to prevent criminal charges from being brought “against any potential co-conspirators of Epstein.”

The agreement lists four women by name, possibly because they received subpoenas or “target letters” from the government over allegations they were paid to recruit girls for Epstein.

But the agreement notes, it is “not limited to” them only.

Maxwell was not one of the four women identified by name in the agreement.

Ex-Miami federal prosecutor David Weinstein said the “not limited to” wording is broad enough for her lawyers to show it applied to her, too.

The Brit socialite, 58, was nabbed in a dramatic FBI raid in Bradford, New Hampshire, where she had been laying low since December.

After removing her from the plush property on Thursday, she was accused of luring underage girls so that Epstein could sexually abuse them.

The FBI charged Maxwell with four criminal counts related to procuring and transporting minors for illegal sex acts and two of perjury.

Epstein was awaiting trial on federal charges of trafficking minors between 2002 and 2005 when he was found hanged in an apparent suicide while in a New York City jail last August. He was 66.

Previously, he pleaded guilty in Florida to state charges of solicitation of prostitution from a minor in a 2008 deal with prosecutors that was widely criticised as too lenient.

Before Epstein’s jailhouse suicide last year, his defence hinged on that deal over his alleged sexual abuse of multiple teenage girls.

His lawyers said it prevented him from being charged with further crimes.

Maxwell’s lawyers could argue “just because her name wasn’t mentioned doesn’t mean she wasn’t protected by the agreement,” Weinstein added.

Gerald Lefcourt, a lawyer who negotiated the 2008 agreement, told the AP last year that he “would never have signed the agreement or recommended it unless we believed that it resolved what it said: all federal and state criminal liability.”

In Maxwell’s indictment, New York prosecutors appeared to build in an insurance policy.

They have deliberately charged her with crimes occurring in the 1990s – slightly before the activities with underage girls that were the subject of Epstein’s 2008 guilty plea.

If a judge were to rule that the prosecutors were bound by the non-prosecution agreement, they could then argue “this stuff happened before, so it’s not covered and therefore Maxwell’s not protected,” Weinstein said.