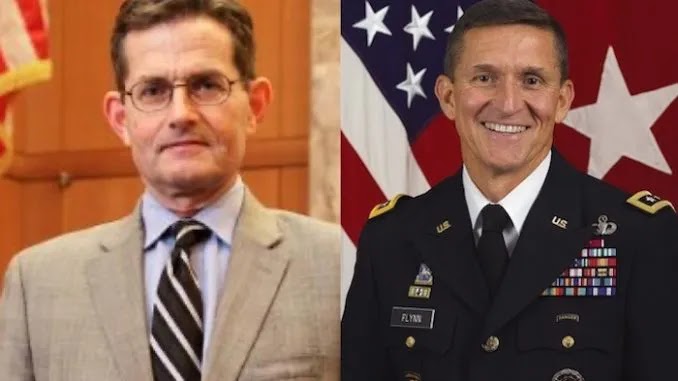 Retired Judge John Gleeson told a federal appeals court on Wednesday that President Trump’s tweets in support of former National Security Advisor Michael Flynn are part of the reason why charges against Flynn should not be dropped.

No, this is not satire.

In a brief filed with the U.S. Court of Appeals for the D.C. Circuit, Gleeson argued that Clinton-appointed Judge Emmet G. Sullivan, who is still presiding over the Flynn case, should be allowed to prevent the DOJ for ending their prosecution.

Breitbart.com reports: Last month, the DOJ moved to withdraw its case, after evidence emerged to suggest that the FBI had pursued Flynn in 2017 to set him up for “lying,” even though it had concluded there was no reason to suspect him of committing a crime.

Moreover, the FBI had failed to provide that evidence to defense lawyers until an outside prosecutor, Jeffrey Jensen, reviewed the case at the request of Attorney General William Barr, finding irregularities in the DOJ’s pursuit of Flynn.

Flynn had already pleaded guilty in December 2018 to charges of lying to the FBI, under pressure from the DOJ, which allegedly threatened to indict Flynn’s son. The terms of that plea agreement were not revealed to the court at the time.

Accordingly, Flynn’s new lawyer, Sidney Powell, moved that the charges be dismissed, and the DOJ agreed. But Judge Sulliavan, who had once accused Flynn of treason, refused to let the case go and invited Gleeson to submit an amicus curiae (“friend of the court”) brief as to why he should not find Flynn in criminal contempt for withdrawing his plea.

Powell filed a writ of mandamus with the D.C. Circuit, seeking to remove Sullivan from the case and have it dropped.

Sullivan filed a response with the appeals court, citing “unusual developments” that justified questioning the DOJ’s “bona fides.” The DOJ responded to his filing by accusing him of undermining the Constitution’s separation of powers.

In his own response Wednesday, Gleeson complained that the government’s new stance contradicted its earlier filings, and claimed: “The Government has engaged in highly irregular conduct to benefit a political ally of the President.”

In one passage, Gleeson cited the fact that Trump had tweeted repeatedly about the case as evidence of interference:

President Trump has since engaged in running public commentary about Flynn’s criminal case through the media and on Twitter. In total, he has tweeted or retweeted about Flynn at least 100 times from March 2017 to present.48 This commentary has made clear that the President has been closely following the proceedings, is personally invested in ensuring that Flynn’s prosecution ends, and has deep animosity toward those who investigated and prosecuted Flynn.

Surprisingly, Gleeson argued that Flynn should not be held in contempt of court, but that his “perjury” in entering a guilty plea that he later withdrew should be considered in sentencing him for what the DOJ now says he did not do:

Flynn has indeed committed perjury in these proceedings, for which he deserves punishment, and the Court has the authority to initiate a prosecution for that crime. I respectfully recommend, however, that the Court not exercise that authority. Rather, it should take Flynn’s perjury into account in sentencing him on the offense to which he has already admitted guilt.

Gleeson also tries to argue  the facts of the case, repeating dubious claims about Flynn’s conduct in early 2017 — for instance, claiming that he “urge[d] a hostile country to undermine current U.S. policy” when what he had actually done is ask Russia not to retaliate overly harshly to U.S. sanctions. Gleeson also argues that Flynn “lied to the FBI,” when the FBI agents who met with him later said themselves that they did not believe he had lied to them at the time.

In concluding, Gleeson acknowledges that the executive branch has sole discretion over the decision to prosecute, but claims it “forfeited” that discretion once it filed charges against Flynn. It could not withdraw those charges, he argued, “simply because Flynn is a friend and political ally of the President.” He said Flynn should immediately be sentenced.