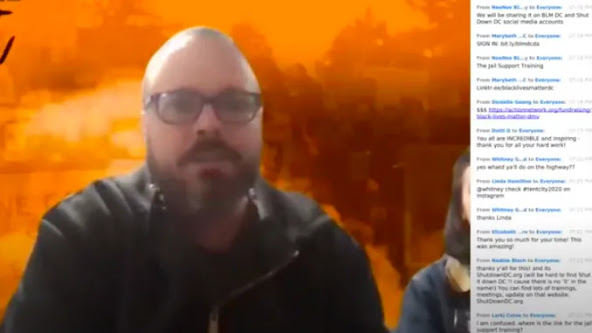 Dozens of leaked internal documents and Zoom call footage have been made public exposing plans by leftwing activists and Deep State unelected federal employees to disrupt and destabilize Tuesday’s US election outcome, including plans to “shut down the White House.”

“We are going to be in a crisis but we want it to be one that we are creating,” a spokesperson says in one of the leaked videos. “We want to make sure that we are on the offense and not the defense. We want them to be responding to us and not us responding to them.

“There may be some people willing to break the windows of government buildings to get inside. If that’s what we need to do, we shouldn’t fight about that, let’s do that,” the spokesperson continues.

The documents and footage can be viewed at a new websites Sunrise Exposed and Expose Sunrise and will be regularly updated with additional content during the next 48 hours. All content has been handed over to law enforcement.

CDMedia report: The information was leaked by a disaffected insider of the “Sunrise Movement,” part of a loose but extremely coordinated network of liberal activists mobilizing around the country in an effort to foment chaos in the wake of a potential Trump victory or a contested election.

The videos and documents discuss a well-coordinated plan to shut down federal buildings (including the White House), public transportation portals, and disrupt Congress when it returns post-election.  Sunrise is an umbrella movement comprised of 400 “hubs” and hundreds of affinity groups including 350.0rg and Extinction Rebellion.

The Shut Down DC Zoom video can be found here.

At one point during a Zoom call that highlighted the role of the militant group “Shut Down DC,” a spokesman states:

We have been in discussion for a couple of months about how to respond to different contested election scenarios. The first step is we think we need to start the post-election phase in the streets, so we invite everyone to come to BLM (Black Lives Matter) Plaza any time after 4:00 on election night. On the 5th, we’re going to shut down the White House. On the 6th, we’re going to shut down larger parts of DC and then the following week, all the mainstream groups are going to come to DC and try to have a march on the 7th.

The network of progressives has enlisted the several key players including Lisa Fithian, a long-time organizer and trainer including stints with Occupy Wall Street and various unions. In the video describing tools and tactics to shut down DC, she states:

Whoever’s got the guns can win – let’s take over the buildings! We are going to be in a crisis but we want it to be one that we are creating. We want to make sure that we are on the offense and not the defense. We want them to be responding to us and not us responding to them.

Another Zoom call featured federal workers, including attorneys and members of the intelligence community, conspiring to use their protected status and positions of power to disrupt and destabilize an outcome beneficial to Donald Trump.

The Federal Workers video can be found here. Additional videos and internal documents will be uploaded in the next 48 hours on the website.