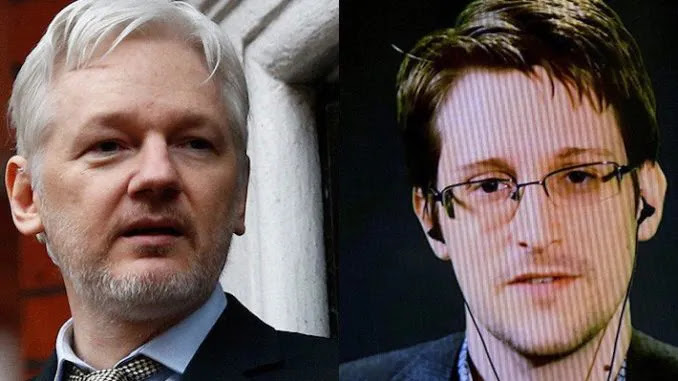 Rep. Tulsi Gabbard has urged President Trump to issue pardons for Julian Assange and Edward Snowden, reminding him that they helped “expose” the “deep state.”

“Since you’re giving pardons to people, please consider pardoning those who, at great personal sacrifice, exposed the deception and criminality of those in the deep state,” Gabbard said in a tweet Thursday.

.@realDonaldTrump Since you're giving pardons to people, please consider pardoning those who, at great personal sacrifice, exposed the deception and criminality of those in the deep state. https://t.co/aeXklUsNSd

Rt.com reports: The request comes less than a day after Trump granted a pardon for former national security adviser Michael Flynn. His case became a central plank in the Trump-Russia “collusion” narrative after he was accused of misleading investigators about contacts with a Russian diplomat following Trump’s election win in 2016. While the Justice Department moved to have the case thrown out, citing misconduct in the FBI’s probe, a federal judge resisted that effort, prompting the president to intervene on Wednesday.

Gabbard, who’s set to leave office at the end of her congressional term, previously introduced a resolution alongside GOP lawmaker Matt Gaetz (Florida) urging the government to drop its charges against Snowden – who was indicted under the World War I-era Espionage Act for his role in leaking classified material revealing illegal mass surveillance by the National Security Agency (NSA). Though the antiquated law was originally intended to prosecute foreign spies, it has been repeatedly wielded against journalists and whistleblowers.

Snowden himself weighed in later on Thursday, saying he had “seen more calls for pardon this year than in all others combined.”

I have seen more calls for pardon this year than in all others combined. No other issue in our time unites left, right, and center like the struggle to end governments' abuse of mass surveillance and secrecy, and that would not be true without you -- and your advocacy. Thank you.

The Libertarian Party echoed the message, noting that Kentucky Republican Thomas Massie has publicly backed the pardons as well, while journalist Glenn Greenwald argued that nothing would “shape Trump’s legacy” better than a reprieve for the two whistleblowers.

We are grateful to those who have exposed ways that our government has lied to and knowingly harmed the American people.

We join with @TulsiGabbard, @mattgaetz, and @RepThomasMassie in calling for a complete pardon for Edward Snowden and Julian Assange.#Thanksgiving https://t.co/qVXMkWUrjk

The Flynn prosecution was an abuse of FBI power, politically motivated, and a violation of the long-time liberal-left view, best expressed by RBG, that lying to FBI without more isn't even a crime. But liberals cheered it because they're authoritarians:https://t.co/nPUrMyNWAF

Snowden approached Greenwald after making off with a massive trove of classified documents in 2013 while working as an NSA subcontractor under Booz Allen Hamilton. Fearing prosecution, he fled the US, hoping to secure asylum in Latin America, but was stranded in Russia after his passport was revoked by US authorities. He has remained there since, where he has been granted permanent residency status after seven years in legal limbo.

Assange co-founded the anti-secrecy group WikiLeaks, which has published thousands of pages of secret documents from governments around the world, including material exposing US war crimes in Iraq and Afghanistan. He was slapped with a 17-count indictment by Trump’s DOJ last year, and was arrested by British authorities soon after. His extradition trial is still ongoing, facing nearly two centuries behind bars should he be found guilty in an American court.