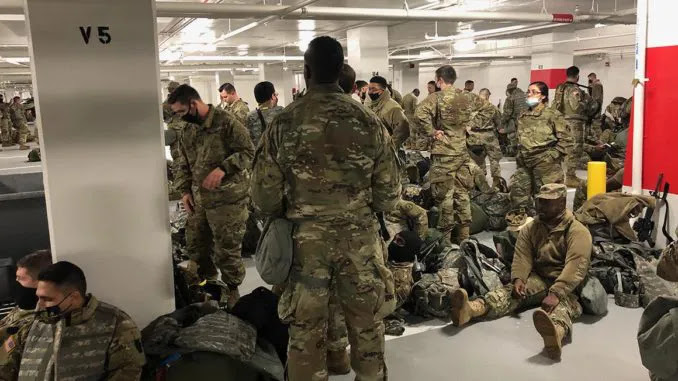 (Paranormal) The US Capitol Police have come under fire after ordering National Guardsmen to leave the Capitol and nearby congressional buildings and find somewhere else to take their rest breaks.

The move came after the troops spent two weeks of sleepless nights protecting Washington DC from an alleged inauguration threat that never happened.

The decision which caused public outrage was overturned hours later and Guardsman were allowed back in the Capitol.

RT reports: Almost 26,000 National Guard troops were flown and bussed to the US capital from all around the country after the January 6 riot. The unprecedented military surge made Washington, DC look like a US-occupied foreign city such as Fallujah, according to some commenters. Joe Biden’s inauguration day came and passed without any public disturbances.

The special security event announced by the US Secret Service for the inauguration ceremony ended at noon on Thursday. Somebody in the US Capitol Police then seemingly decided it was high time for National Guard troops to vacate the Capitol Building, where they had been quartered for two weeks.

Hundreds of Guardsmen were suddenly expelled and forced to look for a new place to sleep – including in the nearby congressional parking garages. The troops there suffered from shortages of restrooms and sockets to charge devices, plus exhaust fumes, overcrowding, and other issues. Understandably, the eviction left many of them with a feeling of humiliation and betrayal.

“It’s f**ked up because it just shows how politicians really feel about the National Guard,” one of them told Task & Purpose. “Leaving our families for the last two weeks to come down here … it’s certainly important and historic, but the day after inauguration you kick us literally to the curb? Come on, man.”

“The next time DC calls, we will let it go to voicemail,” a soldier interviewed by Military Times joked.

Images of soldiers napping on the ground in a parking lot unleashed a wave of public fury. Lawmakers on both sides of the political aisle offered the Guardsmen their offices as lodging.

Congressman Madison Cawthorn visited the troops with some pizzas and an assurance that no soldier will sleep on a garage floor as long as he has something to say about it.

Other politicians seized the opportunity for some partisan bickering as they blamed the other side for the mistreatment of the troops.

Hours after the story was first broken by Politico – and seemingly with quite a few phone calls involved – the Capitol Police apologized to the Guardsmen and allowed them back into the Capitol Building.

“Because of the MASSIVE backlash over this, we are now being allowed back into the Senate building,” a soldier told Military Times. “We’re going to make a big show of marching back into the building.”

It remains unclear why the troops were kicked out from the Capitol in the first place, the incident has exposed the Capitol Police to fresh criticism.