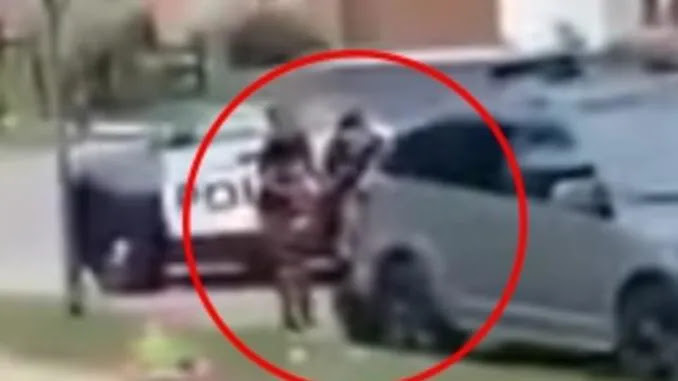 New amateur video footage has revealed that Jacob Blake was involved in a brawl with multiple police officers in the moments before he was shot.

The shooting sparked violent protests, looting, and wholesale destruction in Kenosha, as the nation’s summer of racial unrest continues.

New amateur footage shows the events leading up to the shooting – though the footage is taken from the opposite angle of the initial viral cell phone clip in which Jacob Blake, 29, is seen walking toward his SUV before he is shot.

In the latest video, Blake is seen wrestling with at least two Kenosha police officers.

Blake then manages to break free from the mayhem and begins to walk from the passenger’s side of his SUV to the driver’s side.

As he opens the driver’s side door, gunshots ring out. The video ends there.

DailyMail report: The officers involved in the shooting have been placed on administrative leave and are said to be cooperating with investigators, according to the Wisconsin Department of Justice.

The state DOJ has launched an investigation into the shooting.

Blake, who is listed in serious condition at a Milwaukee hospital, was shot in the back seven times in front of his three children after police were called to his home to reports of a domestic dispute on Sunday.

Video of the shooting of Blake quickly went viral, with angered protesters setting cars on fire, smashing windows and clashing with officers dressed in riot gear across the city throughout Sunday evening and into the early hours of Monday.

‘Anytime deadly force is used, our hearts go out to those affected by it,’ Pete Deates, president of the Kenosha Professional Police Association, said in a statement.

‘We assure you an independent investigation is being conducted by the Wisconsin Department of Justice, Division of Criminal Investigation.

‘Until that investigation is completed, we ask that you withhold prejudgment about the incident and please the let process take place.

‘Governor Evers’ statement on the incident was wholly irresponsible and not reflective of the hardworking members of the law enforcement community, not to mention the citizens of the City of Kenosha.

‘As always, the video currently circulating does not capture all the intricacies of a highly dynamic incident. We ask that you withhold from passing judgement until all the facts are known and released.

‘We, along with the citizens of the great City of Kenosha, ask for peace and to let the process play out fairly and impartially.’

Meanwhile, photographs show the devastating aftermath of a night of violent protests spurred by the police shooting of an unarmed black man in Kenosha on Sunday that turned the city into the nation’s latest flashpoint in a summer of racial unrest.