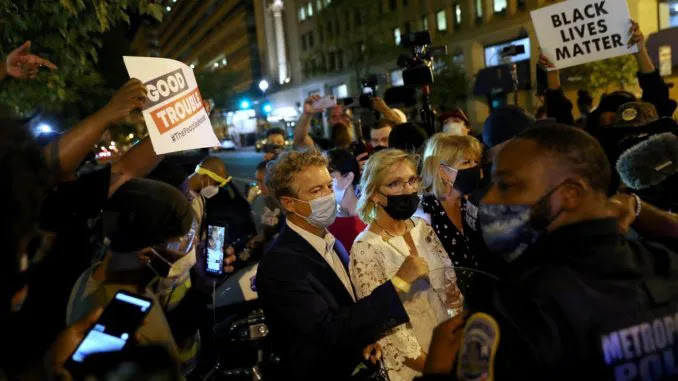 Kentucky Sen. Rand Paul and his wife were attacked by a large mob of Black Lives Matter protesters last night who shoved the police escorting him out of the RNC conference, knocking one of the officers into the Senator.

During an appearance on Fox & Friends this morning, Sen. Paul thanked the police for saving his life and condemned the leftist plan to defund the police.

“We’ve got to wake up, we can’t have Joe Biden rule the country and have no police. I mean, we can’t walk down the street safely in D.C. now. That’s how bad it is,” said Sen. Paul.

Video shows Paul and wife Kelley being surrounded by dozens of activists and aggressively accosted as they leave the Republican National Convention, where Trump had just accepted the party’s nomination, as police officers try to hold the crowd back.

At one point an officer holding a bicycle to shield the couple from the demonstrators was shoved backwards, stumbling into Paul and almost knocking the Kentucky senator to the ground.

DailyMail report: After being escorted safely to his hotel, Paul tweeted thanking police, saying there were ‘over 100 activists’ and that officers had ‘literally saved our lives‘ from the ‘crazed mob‘.

A large crowd that included Black Lives Matter activists had gathered near the White House on Thursday night in an attempt to drown out Donald Trump’s acceptance speech with firecrackers and airhorns.

One man was punched in the back of the head and later knocked to the ground by a mob of activists who also threw water over him.

Meanwhile RNC committeeman Chris Ager and his wife were repeatedly abused by a balaclava-wearing protester who threatened to ‘f*** you up’ as they tried to get into the doors of their hotel.

Speaking to Fox News this morning, Paul said: ‘They would have killed us had the police not been there.

‘The threats were to f— you up, to you know, to kill you. The threats were if they could get ahold of you, and I truly believe with every fiber of my being, had they gotten at us, they would have gotten us to the ground.

‘We might not have been killed. We might just have been injured by being kicked in the head or kicked in the stomach until we were senseless. You’ve seen the pictures. Most of the networks will not show the pictures of this. This is happening in all of our cities. Its got to stop and thank God for the police.”

‘Had we not gotten to the police, I truly leave that the police saved our lives, and we would not be here today, or we’d be in a hospital today had the police not been there.’

The Black Lives Matter movement is particularly strong in Kentucky, which Rand represents, following the police killing of Breonna Taylor.

Paul has been active in pushing for police reform following the shooting, in which officers used a no-knock warrant to kick in the door of the 26-year-old EMT’s home before opening fire, killing her.

The senator has introduced legislation that would ban the use of no-knock warrants, and has dubbed it the Justice for Breonna Taylor Act.

‘After talking with Breonna Taylor’s family, I’ve come to the conclusion that it’s long past time to get rid of no-knock warrants,‘ Paul said as the bill was introduced back in June.

‘This bill will effectively end no-knock raids in the United States.’