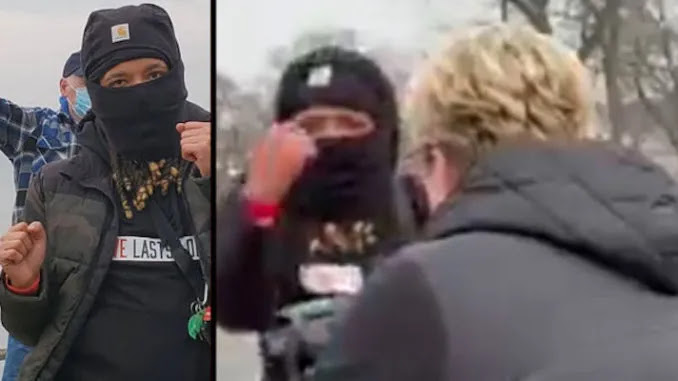 (Paranormal) A prominent Black Lives Matter leader has been arrested for brutally assaulting an 80-year-old Trump supporting grandma in the face.

32-year-old BLM thug Ernst Jean-Jacques Jr. is accused of attacking the elderly woman while she was rallying for President Trump in Swampscott, Massachusetts, on Saturday.

Jean-Jacques Jr. – founder of the Freedom Fighters Coalition of 2020 – was charged with assault and battery on a person 60 years or older.

In a video recorded at the event, Jean-Jacques Jr. can be seen seen screaming at the rally-goers across a barrier and dancing to “It’s Raining Men,” which the Trump supporters were playing in the background.

At one point Jean-Jacques gives the finger to the Trump supporters. 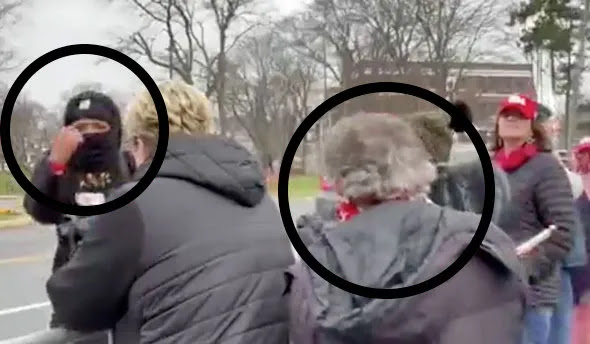 “It was a powder keg.  Just the way people were interacting with one another.  This was definitely more aggressive action than in previous weeks.  It felt like it was going to be violent at any moment.”

Former local radio host Dianna Ploss, the leader of the Trump rally, was recording which captured the moment that Jean-Jacques allegedly punched Greenberg.

The video starts out with Trump supporters dancing to “It’s Raining Men” while waving American flags.  Also in the video frame is a person who police identified as Jean-Jacques with a black face covering on standing in front of the Trump supporters.

At one point, the Trump supporters change the words of the chorus to It’s Raining Trumps.  At some point, it appeared as if water may have splashed onto Jean-Jacques who then reached across the barrier and allegedly punch Greenberg.

While the punch is obscured, it is clear that Jean-Jacques throws a jab, and shortly afterwards runs from the scene.  Greenberg is seen doubled over and it appears she may have been punched in the chest.  Locke, in speaking about Greenberg being struck, said:

“She definitely seemed shaken up.”

Police began looking for Jean-Jacques and were able to take him into custody without incident.

Locke said that the rest of the counter-protesters began marching towards their police department, but apparently changed their minds and went to the Governor’s house where they protested until roughly 2pm.

Jean-Jacques was recognized at the Hats off to Heroes program, sponsored by John Hancock, at a Red Sox game in August of this year.  The in-between innings event normally begins with a video tribute to a military member that is shown to those in attendance.

However, in this instance, the Red Sox received permission from their sponsor and decided to honor Jean-Jacques for his efforts with Black Lives Matter.  During the Hats off to Heroes portion, Jean-Jacques was ‘honored’ for his fight against social injustice.

Congrats to the @RedSox for honouring this entitled scumbag who punched an 80 year old lady because he doesn't agree with her politics.

Ernst Jean-Jacques is a total scumbag and the internet will remember him forever.https://t.co/iiLxta9HUo

“Wow wow wow.  I don’t even know what to say.  Thank you @redsox for the recognition, but I would be selfish to take all the credit.

I accept this “Hats Off to Heroes” award on behalf of the @ffcof2020 and EVERYONE who has helped out during the last few months.  Without you all, none of this would have been possible.  Heading back to Boston with even more motivation than before.  #NojusticeNoPeace.”

Wow wow wow I don’t even know what to say. Thank you @redsox for the recognition, but I would be selfish to take all...