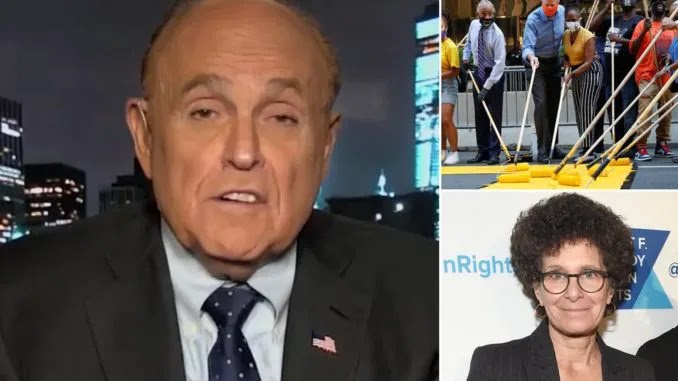 “We are not denigrating anything, we are liberating Fifth Avenue.”

During an interview with “Hannity” on Friday Giuliani said: “Black Lives Matter is an organization run by three Marxists and financed by a convicted terrorist – who I happened to have convicted, who got 58 years in jail and got a corrupt pardon from Bill Clinton”

The movement started with the use of the hashtag #BlackLivesMatter on social media following the acquittal of George Zimmerman in the shooting death of black teen Trayvon Martin in February 2012. It has regained traction following the brutal police killing of George Floyd in Minneapolis on May 25.

The three founders of the movement and hashtag are activists Alicia Garza, Patrisse Cullors and Opal Tometi, who have expanded the project into a national network of over 30 local chapter between 2014 and 2016.

BLM is a network run by umbrella organization Thousand Currents, which radical activist Susan Rosenberg serves as Vice Chair of the Board of Directors.

Black Lives Matter and Thousand Currents is yet to reply to DailyMail.com’s request for comment.

Rosenberg was an active part of far-left revolutionary terror organization May 19th Communist Organization (M19CO), which sought to over throw the US government through armed action and a people’s militia. The group was a part of the Black Power Movement and the New Communist Movement.

She spent 16 years in jail, during which she emerged as an author and AIDS activist, and President Bill Clinton pardoned her on his final day in office on January 20, 2001.

‘Susan Rosenberg, who handles their finances is a convicted terrorist who was involved with the Black Panthers who used to slaughter police officers,’ Giuliani said on the show.

Giuliani has been vocal is his disagreement with the movement, slamming it as racist when the group advocates against the mistreatment of black people.

Giuliani also continued to blast De Blasio for slashing New York Police Department funding by $1billion and allowing the Black Lives Matter mural to be painted in front of the president’s residence.