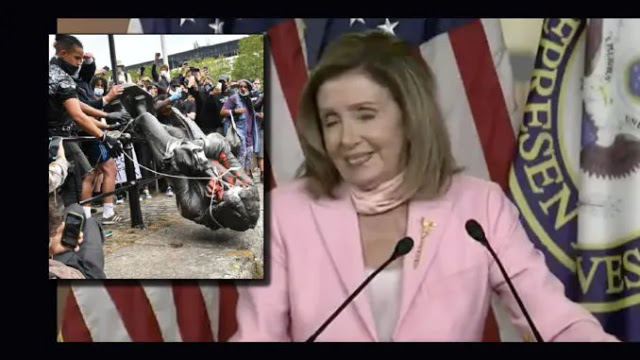 House speaker Nancy Pelosi has “surrendered to the mob” by refusing to condemn protesters who are tearing down statues and defacing monuments Wyoming Republican Sen. John Barrasso said on Friday.

Barrasso warned that Pelosi’s refusal to speak out against tearing down monuments shows how radical, dangerous and out of touch the Democrat Party has become.

Following her comments Barrasso said: “Pelosi has now surrendered to the mob, and it just shows you how radical and out of touch and dangerous the Democrat Party has become under this coalition that the Democrats have put together with the socialists and the Marxists and … the anarchists”

Mike Pence shared the same opinion. Outraged at Pelosi’s comments he told Breitbart news “Tearing down monuments is not protests…Burning churches is not free speech. To have the Speaker of the House tacitly affirm the rule of the mob is unconscionable. For Speaker Nancy Pelosi to say ‘they will do what they will do’ is a surrender to the mob….”

Fox News reports: In her native city of Baltimore. Md. — where her father served as the mayor from 1947 to 1959 and her brother Thomas D’Alesandro III also led the city from 1967 to 1971 — protesters pulled down a statue of Christopher Columbus and then tossed the monument into the city’s Inner Harbor.

“It’s up to the communities to decide what statues they want to see,” Pelosi said, adding that taking down the Columbus monument “doesn’t diminish [her] pride in [her] Italian American heritage.”

However, the city’s Mayor Bernard C. “Jack” Young had harsh words for the protesters who destroyed the statue near Little Italy over the Fourth of July, saying he wouldn’t tolerate the destruction of property. Young said the toppling was unacceptable and the perpetrators, if identified, “will be brought to justice,” The Baltimore Sun reported.

Pelosi said Thursday she’s most concerned about looking ahead and she’s not wedded to physical monuments and tokens of the past, noting she didn’t “even have [her] grandmother’s earrings.”

“This is a city, Baltimore, where Nancy Pelosi’s father was the mayor and he likely contributed money and time to the putting up of that statue to Christopher Columbus. Now she’s fine with tearing it down,” Barrasso said.

“But, Jon,” he said, addressing Scott, “it’s not just about the statue. It’s about the whole effort to cancel a culture of this whole movement to the far, far dangerous left for our country. People [who] want to cancel and defund the police, want to go after the churches, want to go after free speech: all of those things are being attacked and she’s willing to stand by and let it happen.”

Barrasso pointed out that the “entire” party was heading in that direction at the expense of the rest of the country.