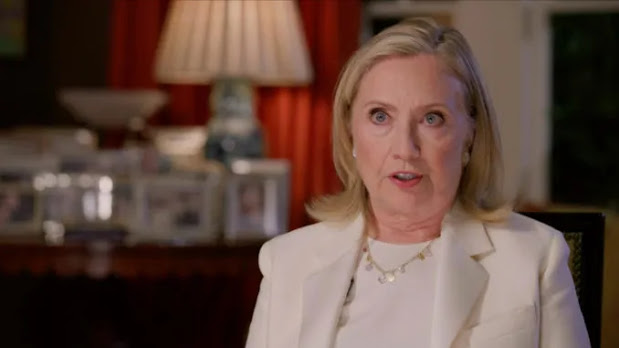 (Paranormal) Hillary Clinton roared back to life on Monday, demanding to see President Trump’s phone records, claiming it will prove he is “a puppet” of Russian President Vladimir Putin.

In a bizarre podcast with Nancy Pelosi, Hillary claimed Trump’s call logs should be investigated due to the fact that he likely called Putin to orchestrate the Capitol riot.

“I would love to see his phone records, to see whether he was talking to Putin the day that the insurgents invaded our Capitol,” Clinton said.

“But we all know that not just him, his enablers, his accomplices, his cult members, have the same disregard for democracy,” Hillary added.

.@SpeakerPelosi and I agree:

Congress needs to establish an investigative body like the 9/11 Commission to determine Trump's ties to Putin so we can repair the damage to our national security and prevent a puppet from occupying the presidency ever again. pic.twitter.com/yR7LQmXm5Z

Clinton then suggested that a “9/11 type commission” should be created “to investigate and report everything that they can pull together” on the riot – a suggestion to which Pelosi enthusiastically agreed.

“I do,” the California Democrat said.

Pelosi then warned that with Trump, “all roads lead to Putin.”

“I don’t know what Putin has on him politically, financially, or personally, but what happened last week was a gift to Putin because Putin wants to undermine democracy in our country and throughout the world,” Pelosi said in a conspiratorial tone.

“And these people, unbeknownst to them, are Putin puppets.”

“They were doing Putin’s business when they did that at the incitement of an insurrection by the president of the United States,” she added.

“So yes, we should have a 9/11 commission, and there is strong support in the Congress to do that.”

Dailycaller.com reports: President-elect Joe Biden is also being urged to create a post overseeing ideologically driven extremism — including the Trump supporters who stormed the capitol, who Biden has called “domestic terrorists.”

Biden has promised to prioritize passing a law against domestic terrorism, according to the Wall Street Journal. His advisers are also pushing him to create a post in the White House specifically to target and combat “ideologically inspired violent extremists,” the publication reported.

“Don’t dare call them protesters,” Biden said of Trump’s supporters who stormed the United States Capitol. “They were a riotous mob. Insurrectionists. Domestic terrorists. It’s that basic. It’s that simple.”