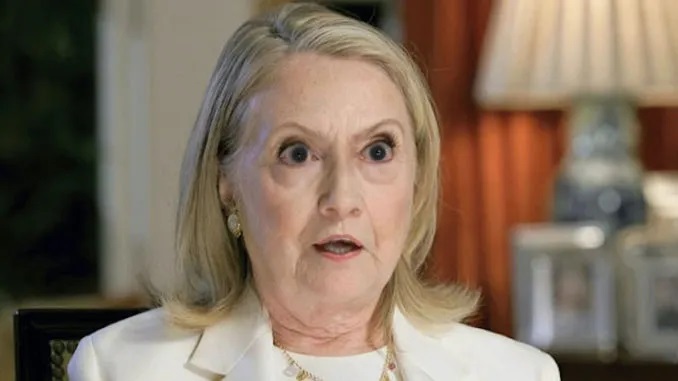 The bombshell allegations have been exposed in documents declassified by the Director of National Intelligence (DNI) John Ratcliffe.

The docs claim that the Obama administration was briefed on Clinton’s cunning plan to frame Trump in the hope of distracting attention away from her email scandal.

The Obama administration obtained Russian intelligence in July of 2016 with allegations against Clinton, DNI John Ratcliffe admitted to the Senate Judiciary Committee on Tuesday.

According to the intelligence, Clinton approved a plan to connect then-candidate Donald Trump to the alleged Russian hacking of the Democratic National Committee (DNC).

Ratcliffe made the admission in a letter to Sen. Lindsey Graham on Tuesday.

Daily Caller reports: Ratcliffe said in the letter that on Sept. 7, 2016, U.S. intelligence officials forwarded a referral for an investigation regarding Clinton to then-FBI Director James Comey and Peter Strzok, the deputy chief of counterintelligence.

Ratcliffe quotes the referral as dealing with Clinton’s “approval of a plan concerning U.S. Presidential candidate Donald Trump and Russian hackers hampering U.S. elections as a means of distracting the public from her use of a private mail server.”

It is unclear who submitted the referral to the FBI and whether the bureau opened an investigation into the matter. The letter does not say that the investigation was criminal in nature, or directly focused on Clinton. It also does not describe the information underlying the Clinton referral or the alleged plan to target Trump.

Comey is scheduled to testify before the Senate Judiciary Committee on Wednesday. The FBI did not respond to requests for comment.

Clinton’s campaign authorized hiring an opposition research firm, Fusion GPS, to investigate Donald Trump’s possible ties to Russia. Fusion in turn hired former British spy Christopher Steele, who compiled a dossier that accused the Trump campaign of a “well-developed conspiracy of cooperation” with the Kremlin to influence the 2016 election.

While the Russian government hacked emails from the DNC and Clinton campaign, the special counsel’s office determined that nobody on the Trump campaign conspired with the Kremlin.

Key allegations in Steele’s dossier remain either uncorroborated or have been debunked. A Justice Department inspector general’s report said that the FBI received evidence in early 2017 that Russian intelligence officers may have fed disinformation into the dossier.

Last week, Graham released a declassified FBI memo which said that the bureau opened a counterintelligence investigation in 2009 against Igor Danchenko, the primary source for Christopher Steele.

According to Ratcliffe, U.S. intelligence agencies in late July 2016 “obtained insight into Russian intelligence analysis” which alleged that Clinton had approved a campaign to link Trump to Russia’s hack of the DNC.

“The [Intelligence Community] does not know the accuracy of this allegation or the extent to which the Russian intelligence analysis may reflect exaggeration or fabrication,” Ratcliffe wrote.

The letter does not make it clear whether the term “Russian intelligence analysis” refers to intelligence activities conducted by the U.S. or by Russia.

Ratcliffe said that Brennan’s handwritten notes from a briefing to Obama refer to the “alleged approval by Hillary Clinton on July 26, 2016 of a proposal from one of her foreign policy advisors to vilify Donald Trump by stirring up a scandal claiming interference by Russian security services.”

Graham said in a statement that Ratcliffe is making the underlying information available for review in a classified setting.

Ratcliffe released a statement shortly after publication of the letter saying that he will be briefing Congress in the coming days about the sources and methods by which the intelligence was obtained.

“To be clear, this is not Russian disinformation and has not been assessed as such by the Intelligence Community,” he said in a statement issued through the Office of the Director of National Intelligence.