Shirtless Antifa Arsonist, Who Has His Name Tattooed On His Back, Identified and Arrested 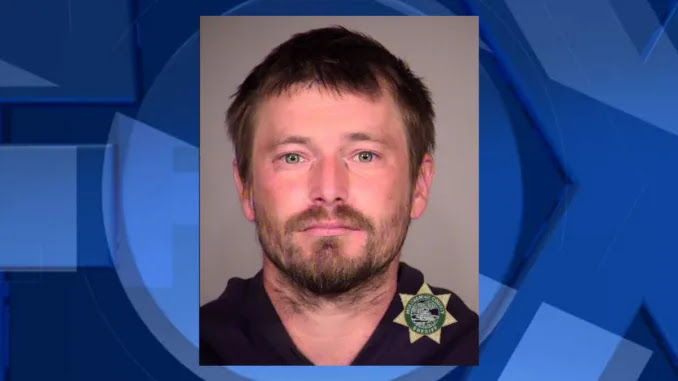 Police have arrested a suspected Antifa arsonist, who was identified because he took off his shirt and revealed a distinct tattoo on his back containing his unusual surname while setting fire to the Portland Justice Center.

Antifa militant Edward Thomas Schinzing, 32, faces up to 20 years in federal prison after taking part in the arson attack to the Portland Justice Center in May.

He was identified because of his self identifying tattoo.

NationalFile report: Schinzing has been charged with arson in a federal court following his actions in setting fire to the Portland Justice Center on May 29 at the beginning of Portland’s ongoing months of civil unrest triggered by the in-custody killing of suspected fraudster George Floyd.

Although he is accused of setting fire to a county building, the federal charge alleges he maliciously damaged a building that receives ample federal funding–adding to his pre-existing convictions and probation.

If found guilty, Schinzing will face a minimum sentence of five years behind bars. He could face up to 20.

At the time of the incident, the suspect was on probation for battering his girlfriend in front of her 8-year-old son.

One of the guys who set the fire in the Portland Justice Center, Edward Thomas Schinzing, has been arrested. He faces 20 years in federal prison. They identified him because he has his surname tattooed on his back.

According to The Oregonian, he admitted to punching his then girlfriend with a closed fist and was sentenced to five years probation after being found guilty of third-degree assault and attempted fourth-degree assault.

Schinzing was reportedly homeless for the past two years, and has racked up seven misdemeanor and two felony charges.

The arson took place late on May 29 with around 30 civilians storming the building, forcing employees who were present to evacuate for their safety, after a window was broken.

Computers, windows, and furniture were damaged in the incursion with parts of the interior being spray painted and burned.

“The fuel for these fires appears to be readily available ordinary combustibles within the Correction Records Department, ignited by an introduced open flame,” said Cynthia M. Chang, a fire investigator working with the ATF.

Aside from the recent revelation, another Portland rioter was reportedly given away under unusual circumstances after his grandmother–who purchased the rioter’s apparel–left a positive review for the faux plate holder, containing the rioter’s picture a few days before he was caught on filming lobbing an improvised explosive device at a Portland courthouse.