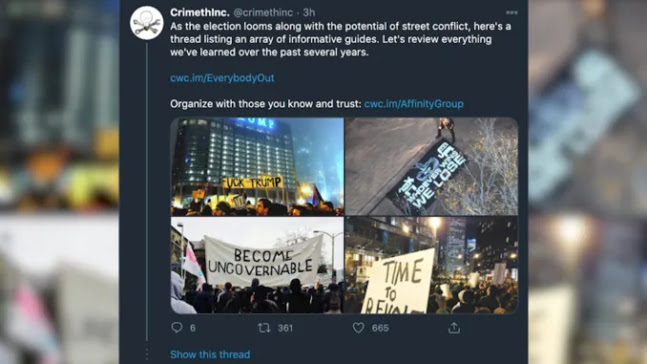 An Antifa-affiliated Twitter account has been sharing riot strategy guides in preparation for US election fallout…. regardless of who wins

US citizens have been boarding up stores and increasing security in anticipation of protests, riots and generalchaos on the streets after Tuesday’s presidential election,

Some people are also advising their fellow citizens to stockpile a week’s worth of supplies in case of the violence on the streets.

But as people prepare for unrest across the US, CrimethInc has been publishing riot strategy guides on Twitter.

RT reports: The self-proclaimed “decentralized anarchist collective” CrimethInc has shared a slew of instructionals covering everything from rioter fashionadvice, to first aid for protesters, including how to manage common injuries from police weapons and even how best to treat gunshot wounds.

As the election looms along with the potential of street conflict, here's a thread listing an array of informative guides. Let's review everything we've learned over the past several years.https://t.co/SD5qHPfQWI

Within the thread are specific posts relating to helmets, gas masks, goggles, how best to deploy leaf blowers and laser pointers, as well as best practices for brandishing shields and umbrellas in the face of tear gas and on-lethal police munitions.

CrimethInc even provided a handy protest simulator for would-be anarchists to test their mettle against the authorities in a ‘choose-your-own-adventure’ game.

You can't always predict how things will go in advance, but it helps to show up with a solid goal and a plan. It's better to set an objective and achieve it than to hope someone else has done the planning.

Of course, the CrimethInc account was quick to add a caveat for the audience, hoping for an anarchist utopia to spring up overnight and preclude the need for any post-election street violence in the extremely unlikely event that both the Democrats and Republicans suddenly decide to scrap the whole thing.

“We hope none of this will be necessary—we hope Trump will concede the election, Biden and all the other politicians will resign, and we’ll suddenly find ourselves in a world without capitalism, white supremacy, or the state,” the post reads, before alluding to the “long fight ahead.”

We hope none of this will be necessary—we hope Trump will concede the election, Biden and all the other politicians will resign, and we'll suddenly find ourselves in a world without capitalism, white supremacy, or the state.

But failing that, we've still got a long fight ahead. pic.twitter.com/xzhC7wyjSB

Many derided the would-be revolutionaries, comparing them to children, while some complained they were exacerbating the social problems in the US, while others expressed dismay at how bad the situation has become. Many just laughed at the impending chaos.