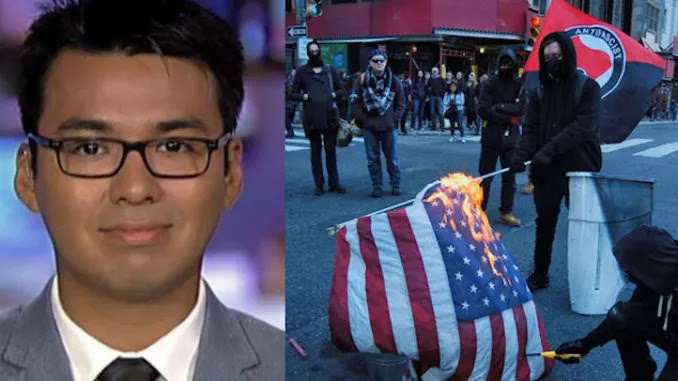 An Antifa whistleblower has revealed that the far-left domestic terror group routinely brainwashes its members to hate the USA.

Speaking during an interview with BlazeTV host Andrew Wilkow,  Gabriel Nadales, author of the book “Behind the Black Mask: My Time as an Antifa Activist,” revealed disturbing insider information about Antifa’s plan for America.

Nadales says he wants to alert the public about the dangers of Antifa by sharing his disturbing story of why he ended up joining them.

He explains that while growing up in the United States, the mainstream media and school were his two main sources of anti-American propaganda.

“A lot of [Spanish media] stories are uniquely targeted to make Hispanics feel marginalized, and make it seem like Hispanics against America,” Nadales said.

“And in middle school and high school, I had several radical left-wing teachers who basically told me to hate America.”

“When you’re bombarded with so many anti-American beliefs and sentiments, it’s easy for somebody growing up in this country to learn to hate America,” he continued.

“Eventually I joined the Anti-Fascist [Antifa] movement because I was preconditioned to hate this country.”

Nadales went on to explain that he was brainwashed into believing that “America and Neo-Nazis were one and the same” and how concepts such as freedom of speech were conflated with fascism because of far-left teachers who see themselves as “activists first and educators second.”

Watch the interview below: