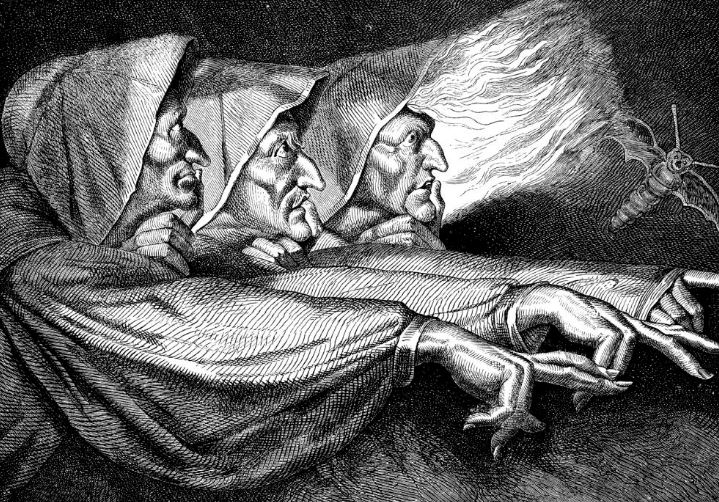 One of Shakespeare’s more popular plays, Macbeth has a bizarre and dangerous past, going right back to its premiere performance in the early 1600s.

At that first performance, legend states that the boy cast as Lady Macbeth took ill and died right before going onstage. When this happened, Shakespeare himself had to go on in drag to play the part.

King James I was reportedly so disgusted by all of the bloody action on the stage that he forbade the play from being performed again for several years.

Tragedy continued to plague the play.

Playing the part of Lady Macbeth was especially risky. Actresses who portrayed the character were chased out of the theater by audiences believing the actress was a real killer, another actress fell 15 feet off the stage during the infamous sleepwalking scene, and in 1926 a minor actor improvised his part and tried to strangle Lady Macbeth onstage.

An 1849 performance in New York whipped up the audience into such a frenzy that a riot broke out and more than 30 people were killed.

The 20th-century performances were especially brutal. When Laurence Olivier played the title role in 1937, a heavy weight above the stage mysteriously came untied and crashed down within inches of the actor.

This production unwisely chose to use actual swords in the fight scenes, and the tip of one of the swords broke off and flew into the audience, hitting a man and causing him to have a heart attack.

A 1942 production starring John Gielgud holds the record for most misfortune. Three actors died during its run, and the costume designer killed himself right after the premiere.

In 1953, Charlton Heston was playing the lead and suffered severe burns on his legs. It was later discovered that his tights had been mysteriously soaked in kerosene.

Theater people are a superstitious lot, and anything causing as much trouble as Macbeth has a bevy of lore about it. For example, unless in actual rehearsal for the play or for an actual production, nobody utters the title/name “Macbeth.”

The play itself is commonly referred to in theater circles as The Scottish Play. Of course actors do accidentally say the title of the play at times, and there are numerous beliefs on how to ward off the bad luck once this happens.

Most of the variations include leaving the theater, spinning around three times, cursing, spitting over one’s left shoulder, and then waiting to be invited back into the theater building.

The big question is what caused the Macbeth curse in the first place. There are differing stories. One tale says that Shakespeare used an actual incantation within the play and witches who attended the performances were so angered that they placed a curse on all future productions of the drama.

Another said that Shakespeare himself cursed the play once King James I forbid it to be performed again.

Regardless of the reason, acting troupes remain wary of the play, even though it proves to be a crowd pleaser with audiences.