The Great Geomagnetic Storm Of May 1921 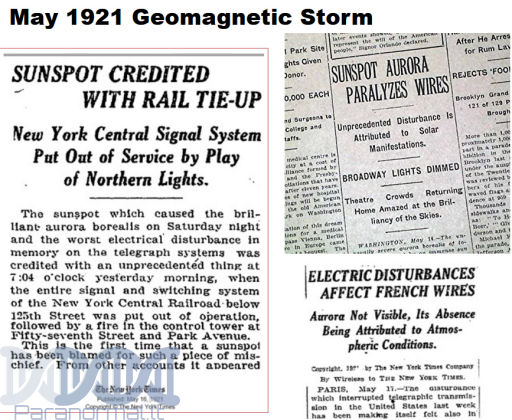 99 years ago this week, people around the world woke up to some unusual headlines.

They didn’t know it at the time, but the newspapers were covering the biggest solar storm of the 20th Century. Nothing quite like it has happened since.

It began on May 12, 1921 when giant sunspot AR1842, crossing the sun during the declining phase of Solar Cycle 15, began to flare. One explosion after another hurled coronal mass ejections (CMEs) directly toward Earth. For the next 3 days, CMEs rocked Earth’s magnetic field. Scientists around the world were surprised when their magnetometers suddenly went offscale, pens in strip chart recorders pegged uselessly to the top of the paper.

Then the fires began. Around 02:00 GMT on May 15th, a telegraph exchange in Sweden burst into flames. About an hour later, the same thing happened across the Atlantic in the village of Brewster, New York. Flames engulfed the switch-board at the Brewster station of the Central New England Railroad and quickly spread to destroy the whole building. That fire, along with another one about the same time in a railroad control tower near New York City’s Grand Central Station, is why the event is sometimes referred to as the “New York Railroad Superstorm.”

What caused the fires? Electrical currents induced by geomagnetic activity surged through telephone and telegraph lines, heating them to the point of combustion. Strong currents disrupted telegraph systems in Australia, Brazil, Denmark, France, Japan, New Zealand, Norway, Sweden, the UK and USA. The Ottawa Journal reported that many long-distance telephone lines in New Brunswick were burned out by the storm. On some telegraph lines in the USA voltages spiked as high as 1000 V.

During the storm’s peak on May 15th, southern cities like Los Angeles and Atlanta felt like Fairbanks, with Northern Lights dancing overhead while telegraph lines crackled with geomagnetic currents. Auroras were seen in the USA as far south as Texas while, in the Pacific, red auroras were sighted from Samoa and Tonga and ships at sea crossing the equator.

What would happen if such a storm occurred today?

Researchers have long grappled with that question–most recently in a pair of in-depth papers published in the journal Space Weather: “The Great Storm of May 1921: An Exemplar of a Dangerous Space Weather Event” by Mike Hapgood (Rutherford Appleton Laboratory, UK) and “Intensity and Impact of the New York Railroad Superstorm of May 1921” by Jeffrey Love (US Geological Survey) and colleagues.

The summary, above, is largely a result of Hapgood’s work. He painstakingly searched historical records including scientific journals, newspaper clippings, and other reports to create a moment-by-moment timeline of the storm. Such timelines are invaluable to emergency planners, who can use them to prepare for future storms.

Jeffrey Love and colleagues also looked into the past and–jackpot!–they found some old magnetic chart recordings that did not go offscale when the May 1921 CMEs hit. Using the data, they calculated “Dst” (disturbance storm time index), a measure of geomagnetic activity favored by many space weather researchers.

“The storm attained an estimated maximum −Dst on 15 May of 907 ± 132 nT, an intensity comparable to that of the Carrington Event of 1859,” they wrote in their paper.

This dry-sounding result upends conventional wisdom. Students of space weather have long been taught that the Carrington Event (-Dst = 900 nT) was the strongest solar storm in recorded history. Now we know that the May 1921 storm was about equally intense.

If the May 1921 storm hit today, “I’d expect it to lead to most, if not all, of the impacts outlined in the 2013 Royal Academy of Engineering report led by Paul Cannon,” says Hapgood. “This could include regional power outages, profound changes to satellite orbits, and loss of radio-based technologies such as GPS. The disruption of GPS could significantly impact logistics and emergency services.”