The Real Story Of Encounter With The Yovar Demon 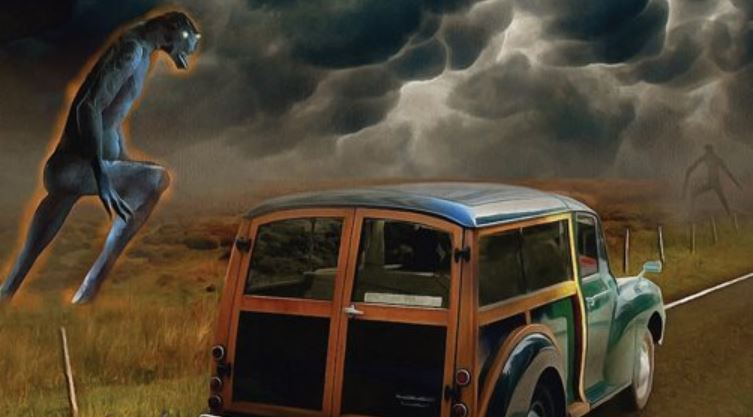 In the summer of 1962, a 25-year-old Huyton man named John Garnet-Chaffins met a beautiful 19-year-old girl at a party in Whiston named Jo Ann Carlson.

John and Jo Ann fell madly in love with one another, but the only obstacle to their romance was a distance of nearly sixty miles, because Jo Ann lived in the little town of Holmfirth in West Yorkshire, so John borrowed some money from his father and bought a Morris Minor to make the twice-weekly journey to see his girlfriend.

One night in September 1962, at around 11.30pm, John was taking Jo Ann home via the A635 – a lonely road which crosses some of the most bleak moorland of Greater Manchester, and on this night, as the car was passing through Saddleworth Moor, the low oppressive opalescent moonlit clouds started to billow and change shape as if a whirlwind-like atmospheric disturbance was stirring them up.

The effect reminded John of the blossoming shapes drops of milk make when they disperse into a tumbler of clear water.

Jo Ann had a phobia of storms after being struck by lightning as a child, and gazing at the turbulent heavens beyond the windscreen, she clung onto John’s left arm as he drove along the road.

A strange grey mist rolled along the moors and covered the road ahead, and as the clouds continued to billow into strange, unnatural forms, Jo Ann let out a yelp and asked, “What’s that over there?”

“What?” said John, startled by his girlfriend’s outburst. At that same moment, the car stalled and its electrics failed. Jo Ann pointed to something shadowy and towering which was loping across the moorland to the left of the road.

It looked vaguely human in shape but it was gigantic – about fifty feet in height perhaps – and it had a faint orange glow around its body.

This giant entity was leaning heavily in the direction it was walking, at an angle of about 25 degrees, seemingly about to topple forwards, yet it remained upright.

Jo Ann wound the window down and now she and John could hear the slow rhythmic thuds of the oversized humanoid as it moved across the moor.

At one point the head of the creature turned to face the car and the young couple saw its eyes flare up into two bright points of white light. The face looked flat with a prominent protruding bottom jaw.

About five hundred yards away in the gathering mist, John and Jo Ann noticed a second gigantic figure, only it was in silhouette, but it looked as if it was coming towards them.

Jo Ann began to scream, and John attempted to restart the car. When the nearer giant stepped over the road ahead with one gargantuan stride, the car started and John reversed the vehicle, travelling blindly backwards in the mist until he managed to turn the car around.

He was about to drive all the way back to Liverpool when he saw a group of figures walk out of the fog and come down the road towards the vehicle. They all had black hooded robes on that were similar to the habits worn by monks.

John beeped his horn and flashed his headlamps but the crowd of about a dozen men continued to bar the way.

John tried to call their bluff by revving the vehicle and accelerating forwards for about twelve feet before he slowed and braked.

One of the hooded strangers broke away from the group and ran around the Morris Minor to the driver’s window and with some urgency John told Jo Ann to wind up her window.

The tall hooded man had wild staring eyes as he looked through the driver’s side window and in a Scottish accent he told John to open the door, but John revved the car.

The weirdly-dressed Scotsman then produced a dagger and looked as if he was going to try and smash the window with its handle.

John floored the accelerator and the Morris Minor shot down the road. The other hooded figures dived out of the way.

A few years after this weird event, John saw a picture of the Moors murderer Ian Brady, and he was fairly certain that he had been the very same Scottish weirdo in the monk’s habit with the dagger who had told him to leave the car that foggy night on the moors.

One night in November 1970, John and Jo Ann, who were now married, took the same route to visit Jo Ann’s parents – down the A635 – this time in a Morris Minor Traveller.

The time was midnight as they passed Saddleworth Moor, and there were the two giant figures again striding about across the foggy desolate landscape. This time John sped along the road and got out of the area in record time.

I heard a long time ago that there are ancient demons that roam the moors called the Yovar, and they are said to even predate the Devil and are more evil than him.

Occultists say the Yovar demanded human sacrifices or they would send plagues and destroy crops.

Given the tragic history of the moors in that area, the ancient legends of a class of unimaginably evil demons have a chilling ring to them…

Antarctica’s two most important glaciers, Pine Island and the Thwaites Glacier, are crumbling faster than ever. When these glaciers melt, the sea level will rise by a meter.

At the end of October, experts expect a very strong magnetic storm. They noted the fact that it will become the most powerful in recent years.

30.09.2020 laikas 17:08 Nazca drawings point to the ancient temple of Angkor Wat
If we take and draw lines across the entire globe from that position in which they are drawn on the Nazca plateau, then we will get a semblance of a modern globe and all the lines from the other side of the globe will converge on the ancient Angkor Wat temple in Cambodia....