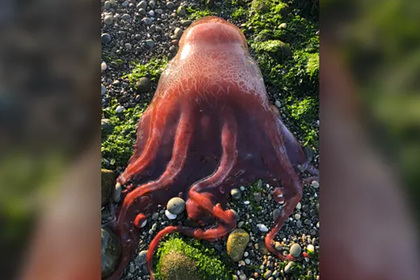 The remains of a mysterious creature, washed ashore on Whidbey Island in the US state of Washington, puzzled experts. This is reported by Livescience.

Whidbey Island resident Ron Newberry discovered a red block about a meter in size while fishing on the shores of Puget Bay. The creature with numerous tentacles was already dead. Later, the low tide carried him out to sea, but the fisherman still had pictures that he posted on Facebook and Instagram. Newberry hoped that knowledgeable people would see them and explain exactly what he found.

The photographs interested experts from the Seattle Aquarium, the University of Washington, the National Oceanic and Atmospheric Administration and the Smithsonian Institution. They agreed that they depicted a cephalopod mollusc, but rejected suggestions that it was Octopus rubescens, a common on the Pacific coast of the United States, or a deep-sea hellish vampire. Most of all, the creature resembled a little-studied seven-armed octopus.

Seven-armed octopuses have never been seen in Puget Bay or off the coast of Washington before. Most often, this species was observed in the Atlantic Ocean. The only known specimen caught in the South Pacific.

The seven-armed octopus is considered one of the largest octopus species. Their length is up to 3.5 meters. Contrary to the name, they have eight tentacles, but one of them is used for reproduction.

In 2018, it was reported that residents of Kamchatka found the remains of an unusual hairy creature on the coast. The carcass washed ashore after a strong storm near the village of Pakhachi, Olyutorsky district.