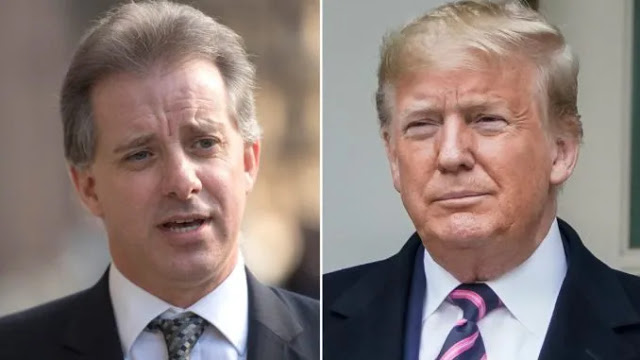 President Trump has called for the extradition, trial and imprisonment of disgraced British spy Christopher Steele.

Steele is the former MI6 officer responsible for the ‘dirty dossier’ published in 2016 that helped kickstart the ‘Russiagate’ investigation.

Trump said “This man should be extradited, tried, and thrown into jail,” and called Steele a “sick lier [sic] who was paid by Crooked Hillary & the DNC!”

This man should be extradited, tried, and thrown into jail. A sick lier who was paid by Crooked Hillary & the DNC! https://t.co/ywMBeAgaGz

RT reports: Steele – a former officer with Britain’s MI6 and a private eye since his retirement from the agency in 2009 – was hired by Hillary Clinton’s campaign through intermediaries in 2016 to dig up dirt on the rival presidential candidate.

Steele compiled a dossier of wide-ranging allegations, which, among others, claimed that Moscow had ‘cultivated’ Trump as a puppet candidate for years, and that Russia’s Alfa Bank transmitted messages between the Trump campaign and the Kremlin. It also featured rather bizarre claims, including that the Kremlin blackmailed Donald Trump with a video of him watching two prostitutes urinating on a bed in a Moscow hotel room.

These claims were never proven, and, in some cases, completely unprovable. This fact was known to the former FBI director, James Comey, who nevertheless presented the dossier to a surveillance court to justify wiretapping a number of Trump campaign officials. That FBI investigation morphed into the Mueller probe, which although dismissed by Trump as a politically motivated “witch hunt,” came to define the first two and a half years of his presidency.

Trump’s latest call for retribution comes after a British court ordered Steele to pay thousands of pounds in damages to two Russian bankers with the Alfa Group. The bankers contested that one of Steele’s claims – that they delivered “large amounts of illicit cash” to Russian President Vladimir Putin in the 1990s – was untrue.