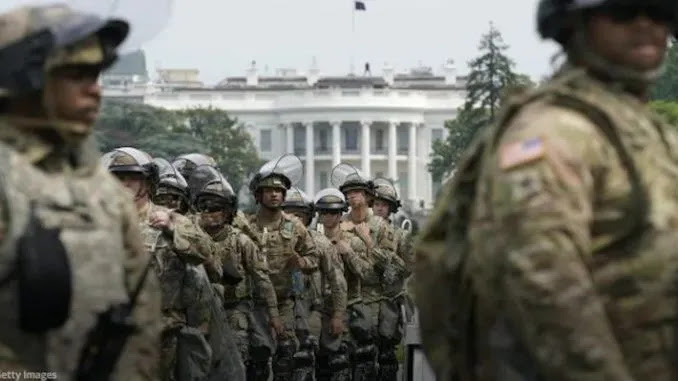 (Paranormal) Trump-hating mayor of Washington, DC, Muriel Bowser has put the National Guard on standby ahead of the January 6th pro-Trump protests.

The March to Save America event is expected to attract people from all around the country, and will be attended by President Trump himself, members of his campaign team and other prominent public figures.

A pre-rally at Freedom Plaza and sister rallies at the Capitol and the Supreme Court are also planned for Tuesday – all being staged to send a message to Congress about certifying the electoral vote for the 2020 presidential election.

Breitbart.com reports: The main rally will take place on Wednesday at the Ellipsis at the White House—informally called “the President’s Lawn.” The event is open to the public but many of the seats are reserved. Gates will open at 7 a.m. and attendees will face a Secret Service checkpoint to enter the White House grounds.

Despite the rally being backed by the president and some of the millions of Americans who cast their votes for Trump on November 3, D.C. Mayor Muriel Bowser has put the National Guard on standby and warned participants whom she said are “seeking confrontation.”

While it will be hurtful to watch what’s happening in DC Tuesday & Wednesday, let’s please stay out downtown just those two days, and resist getting goaded into confrontation by those in the waning days of a losing struggle https://t.co/pBQII0z4FI

Many of the same speakers and sponsors and an expected crowd of thousands of American citizens are expected to show up on Tuesday for a pre-rally to take place from 1:00 to 8:00 p.m. at Freedom Plaza, located on 14th Street NW and Pennsylvania Avenue NW.

Two other events are planned on Tuesday. Moms for America’s Save the Republic rally will take place on the Capitol grounds across from the U.S. Supreme Court, featuring prayer and speakers.

“On Nov. 3rd millions of mothers flooded to the polls to vote for freedom, family, and all we hold dear,” Moms for America founder and president Kimberly Fletcher told Breitbart News. “That is what we are fighting for today.”

“If our elections aren’t secured, our Republic is lost,” Fletcher said. “This isn’t about winning an election. It’s about saving the Republic, ensuring only legal votes count so that our voice is heard and our legal votes are protected.”

From 2:00 to 5:00 p.m. Tuesday, Virginia Women for Trump will rally on the steps of the Supreme Court.