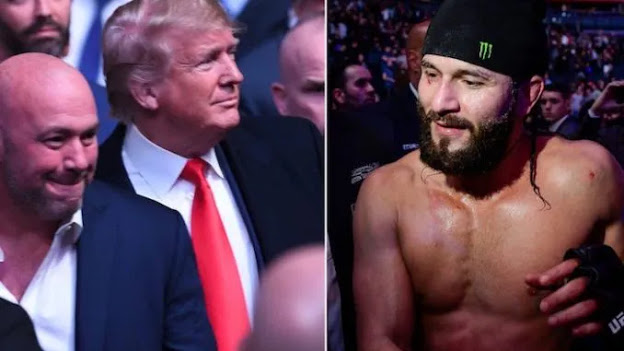 UFC fighter Jorge Masvidal has promised to assemble some of his teammates to attend MAGA events following reports of Trump supporters being violently attacked by BLM and Antifa terrorists.

The footage shows a masked BLM activist striking an elderly man from behind and knocking him face-down onto the ground.

A female BLM agitator then steals the man’s phone while Antifa terrorists repeatedly stomp on his head.

Masvidal, a vocal Trump supporter, said on Twitter that “I bet I can get a couple of teammates and start attending these things #supernecessary.”

And I say this not to promote violence. To keep the peace. We are all in this together #theressurection

Dailywire.com reports: The attacks happened late in the afternoon and well into the night after the majority of people had already left the “Million MAGA March” to show their support for President Donald Trump. Later in the night, members of a purported right-wing group went after some in the leftist groups.

The violence caught the attention of the president, who responded by writing on Twitter:

Masvidal is a Trump supporter who campaigned for the president during the election as a part of “Fighters Against Socialism.”

Masvidal was featured in a two-minute video for the Trump campaign where he stated:

I’m gonna let you in on something. The Democrats just think that they’re entitled to the Latino vote. They think that we just have to hand it over to them. That’s right. We sure as hell don’t.

You know what else is not gonna work for them? Playing “Despacito” on your cellphone to pander to us. Hell no. You gotta give us some credit for having heads on our shoulders. I’m going to wrap this up with some words of Barack Obama; he said, “Elections have consequences.” That is true. And those words have never been more true than they are today. We either re-elect President Trump and Keep America Great … or we let Joe Biden destroy the greatest country the world has ever seen.

Now, I’m a professional athlete, and I’ve been one for most of my life, so I’ve seen things through a sports lens; that makes Donald Trump our head coach, and before the global pandemic we were winning Super Bowls. And when you’re winning Super Bowls, you don’t fire the coach—it doesn’t matter if you don’t like the plays he runs, the players he puts on the field, or what he says on Twitter. You sure as hell don’t replace him for another coach that’s been in the business for 47 years at every level and never won a f***ing game.