Unexplained Case Of A Secret Passage Through Time 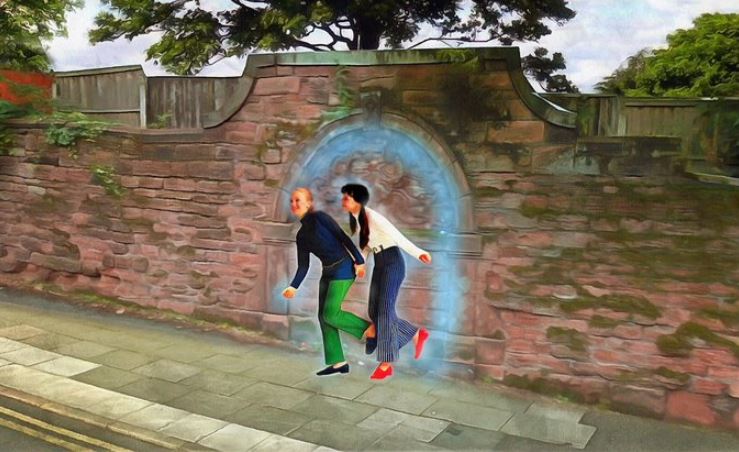 Just after teatime on Monday 4 August 1969, sometime between the end of TV programmes Robinson Crusoe and the beginning of The Magic Roundabout – around 6.40pm – a 13-year-old girl named Holly left her home on Gateacre’s Cuckoo Lane and walked to the house of her best friend Jane on Beechurst Road a quarter of a mile away.

The girls both attended the same school and were currently enjoying the indescribable freedom of the summer school holidays. Holly and Jane strolled up Grange Lane that pleasant early evening, and upon reaching the Wilson Memorial Fountain, the girls noticed three lads around their age, loitering on the green.

One of the boys – Charlie Dickson (a dead ringer for The Monkees’ Davy Jones) – had a transistor radio blaring out Thunderclap Newman’s “Something in the Air” – and the other two lads – Pete Greenhall and Russell Clive – were kicking a scuffed “casey” football to one another.

Russell was a born show-off and upon noticing the approach of the girls he made a quite unnecessary dramatic dive across the grass to save the ball, and belly-flopped as the ball whizzed past him.

The ball rolled to Holly’s feet and she booted it hard. Russell tried to get up and catch the ball but was too slow, and the casey hit the hand Charlie Dickson was holding his beloved radio in.

The ‘solid state’ MW/LW pocket radio in its black leather case flew out of Charlie’s hand and landed in the grass. He was about to shout at the careless kicker till he saw that the blonde beauty Holly had hit him with the ball. Charlie was struck dumb for a moment, and then as the girls walked on giggling, he shouted, ‘We could do with you in our team, Holly!’

‘What a suckhole,’ Pete Greenhall said in a mocking tone to Charlie, and to this barbed remark he added, ‘you haven’t got a chance with her, mate, forget it. You’re a midget as well.’

‘I’m five-foot five, which is normal for my age,’ claimed Charlie, but his two friends simultaneously answered: ‘Five-foot three!’

Knowing Pete was probably right about not having a chance with Holly, but wanting to get on his nerves, Charlie picked up the radio then sprinted after Holly and Jane as they went up the Brow. Behind him, Charlie could hear his friends forcing howls of laughter.

He followed the girls for about 200 yards, and then he finally conjured up the courage to ask Holly out. ‘Holly, I need to ask you something,’ Charlie said, and he ran in front of the girls, barring their way. They stopped.

‘If it’s what I think you’re going to ask, the answer is “No”’ said Holly.

‘Just hear me out,’ said Charlie, and trying to be cool, he took a crooked-looking cigarette out his shirt pocket and then he produced a book of matches from his back trouser pocket and asked Holly: ‘Do you smoke?’

‘No, it stunts your growth,’ said Holly, and Jane burst out laughing and whispered something about Charlie’s height. He lit the cigarette, coughed, and then he moved backwards, towards the brick wall on Gateacre Brow where an old bricked up sandstone archway exists; the vestiges to an entrance to the vast garden of Gateacre Grange in Victorian times.

‘There are three reasons why you should go out with me, Holly,’ said Charlie, leaning against the bricked-up arch, ‘first I am going to be an airline pilot, and they get a lot of money. Secondly, I am the most romantic person you’ll ever meet; and thirdly – ‘

Charlie Dickson fell backwards through the wall as if it wasn’t there. One moment he was leaning on that old filled-in archway, and then he seemed to fall backwards and through the solid sandstone.

As Holly and Jane stood there, lost for words, they saw the boy’s smoking cigarette on the pavement – the only proof he had been there. Jane told Holly they should tell Charlie’s friends down the Brow, but Holly reached out towards the wall Charlie had impossibly fallen through, and the girl’s hand passed through the bricks as if they were made of air. Jane yelped with shock.

Holly withdrew her hand, but then curiosity got the better of her, and she reached into the immaterial wall until the bricks were up to her elbow, and she felt a large cold hand inside that wall grab her hand and drag her through it.

She screamed and found herself in a garden, and a giant of a man had hold of her by her arm and the other hand gripped at the collar of her blouse.

The man had dark brown eyes, a thick moustache, and he wore a white shirt tucked into pale brown trousers which went down to enormous black boots. A similarly dressed man had hold of Charlie about ten feet away.

‘Now that’s a thing most contrarious,’ Holly thought the giant said, and he stooped down and asked her: ‘how did you come through the wall? Are you a witch?’

The huge man talked in some sort of Lancashire accent to his colleague, and Holly and Charlie could hardly make sense of the words the men spoke. The teens were in the gardens of Gateacre Grange.

The smaller man, possibly a gardener, was now examining Charlie’s radio, and when the box burst into pop music, the man threw it onto the ground as if it was going to explode.

The huge man let go of Holly and went to look at the radio, and Holly turned and ran at the wall. She’d either knock herself out or pass through it, but she was so scared, she had to try. She passed through the wall and slammed into Jane, knocking the girl to the pavement, and seconds later, Charlie came running through the wall.

‘Run! They might come through!’ he yelled, and fell over Holly and Jane. Charlie and the girls ran down Gateacre Brow. Pete and Russell didn’t believe the seemingly far-fetched story, but Holly started seeing Charlie after that amazing trespass into what seems to have been a bygone age.

Holly, Charlie and Jane would often venture through that strange archway to visit what seems to have been the Gateacre Grange of the 1890s and their stories could fill a book. After a few weeks, the ‘secret passage’ into the 19th century stopped working – but who knows? It might open up again one day…