Why did megalodons die out? 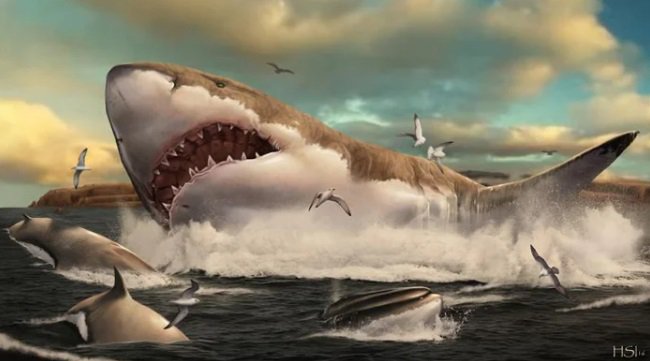 The new hypothesis says that the famous apex predator did not cope with the cooling of the Pliocene.

It is believed that megalodons – the largest sharks ever to inhabit the oceans of our planet – left their young in warm shallow waters, where there was a lot of food and few predators. Later, crumbs-megalodons gained strength and grew by leaps and bounds, becoming the most formidable force outside the land.

However, as sea levels dropped more and colder around the world, caring apex predators may have found fewer coastal areas where their young could safely reach adulthood. This is reported by the researchers in an article published in the journal of the Royal Society of Biology Letters. Megalodons took 25 years to fully mature, and this is “extremely delayed puberty,” the researchers say.

According to the study, the excessive dependence of the megalodons (Carcharocles megalodon) on these “nurseries” contributed to the end of their hegemony in the oceans, which lasted for 20 million years.

Until their extinction about three million years ago, adult megalodons had no rivals among sea creatures and fed on smaller sharks and even whales. However, Megalodon cubs were vulnerable to attacks from other predators, including sharks. “Kindergartens” on shallow continental shelves with an abundance of small fish and few competing predators gave them the ideal place to reach their enormous size.

The research team found an area of ​​such nurseries off the east coast of Spain in the province of Tarragona. Judging by the size of the teeth found, this place was once home to young megalodons.

According to the authors, the Spanish nursery can be described as “the perfect place for growing up.” It was “a shallow bay with warm waters, access to the sea and extensive coral reefs, home to many invertebrates, fish, marine mammals and other sharks and rays.”

The researchers analyzed eight other sets of shark teeth that were previously collected from different locations in the United States, Peru, Panama, and Chile. They concluded that four of them – two in the United States and two in Panama – belonged to young megalodons. The authors of the work suggest that these four areas could also be nurseries.

“The other four formations <…> exhibit structures typical of populations dominated by adults, suggesting that these regions may correspond to feeding or mating areas,” the study authors.
Sharks constantly lose teeth throughout their life, and “nurseries” are areas with a large number of sharks.

“As a result, a huge number of teeth can fall out in these places, which increases the chances of subsequent fossil discoveries,” the authors of the article note.

Megalodons enjoyed warm and temperate waters during the Miocene, which lasted about five to 23 million years ago. But the cooler Pliocene period suited them much less.

As their victims adapted and traveled to colder waters, the megalodon stayed where the oceans were warmer. This has intensified competition between megalodons and the smaller but more agile great white sharks (Carcharodon carcharias).

The significant reduction in shallow water nurseries due to the loss of sea level caused by the cooler climate could also contribute to the eventual extinction of the megalodon.

According to a study published this year, megalodons reached 16 meters in length, had a head about 4.65 meters long, a dorsal fin 1.62 meters high, and a tail 3.85 meters long.