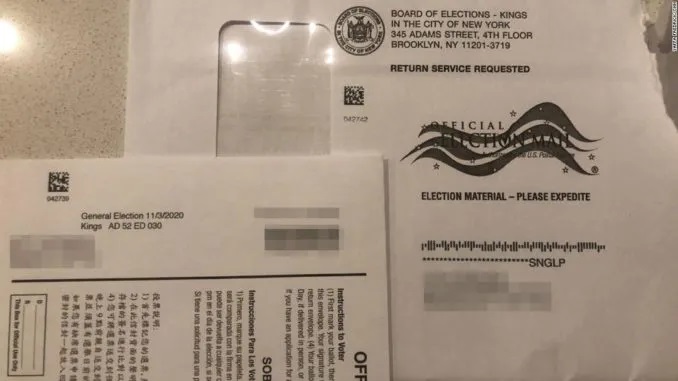 The New York City Board of Elections blamed the problem on the company hired to print and mail the ballots.

The incident has left officials scrambling to issue new ones in time for the election and comes amid widespread discussion about the security of mail-in voting.

RT reports: Due to a printing error, the names and addresses on an entire print run of ballots and the secondary envelopes they’re supposed to be sealed in didn’t match, the NYC Board of Elections (BOE) admitted on Tuesday, promising to send the affected voters new ballots.

A total of 99,477 voters, mostly in Brooklyn, got the faulty mailing, which the Board blamed on Phoenix Graphics – a long-time contractor with the department. The same company will be tasked with printing and mailing new ballots, complete with an insert explaining why they’re receiving a second ballot, and New Yorkers have been warned not to mail in the defective ballots.

Further complicating the mess, New York Governor Andrew Cuomo attempted to stop the city Board of Elections from sending out replacement ballots on Tuesday, calling them up at the last minute and urging them to send out only replacements for the misprinted envelopes. Sending all new ballots would be an “overcorrection,” senior Cuomo adviser Richard Azzopardi told the New York Post on Tuesday – while another source suggested the real reason Cuomo didn’t want new ballots sent was that President Trump might claim it meant New Yorkers were being encouraged to vote twice.

Other state officials who spoke to the Post on condition of anonymity called Cuomo’s response “twisted” and “a horrible mistake,” and State Senator Zellnor Myrie (D-Brooklyn) eviscerated the governor’s plan in a tweet as “straight-up disenfranchisement and an affront to our democracy.”

If Cuomo was worried about being accused of fraud by the president if the board sent out new ballots, however, he can rest easy – it’s already happened before a single replacement ballot was delivered. Trump responded to the news of the snafu with a characteristic ‘I told you so,’ taking to Twitter on Wednesday to declare “Mail In Ballots in New York City a total MESS.”

Wow! 100,000 Mail In Ballots in New York City a total MESS. Mayor and Governor have no idea what to do. Big Fraud, Unfixable! Cancel Ballots and go out and VOTE, just like in past decades, when there were no problems!

Insisting the “Fraud” was “Unfixable,” he urged New Yorkers to forget about voting by mail and head for the polls in person – a suggestion echoed by some on the left. Indeed, voters from both ends of the political spectrum came out to dump on the BOE on social media, wondering aloud how difficult it was to get mail-in ballots right for a city that has had them for over a century.

who, exactly, runs the boe in new york state?

who is responsible for the nys/nyc boe?

why is cuomo shrugging off all responsibility here

how deep into dystopia must we plunge?

who is running our board of elections?

Phoenix Graphics, based in Rochester, NY, was awarded $4.6 million in May in a no-bid contract to print the ballots. Its lax proofreading skills have already caused alarm – a misprint on absentee ballots sent to voters in Queens earlier this week led recipients to fear their votes would be thrown out on a technicality.

Their fears aren’t necessarily unfounded – about a quarter of New Yorkers’ absentee ballots from the 2020 primaries were disqualified, mostly because the Board of Elections and the postal service delayed delivery. At the time, Mayor Bill de Blasio attempted to reassure voters skittish about November, expressing confidence that the Board could “learn from this and be prepared for the general election.“

“Three months is a long time,” he added. Three months later, the mayor said the latest errors were “appalling.”

“I don’t know how many times we’re going to see the same thing happen at the BOE and be surprised.“