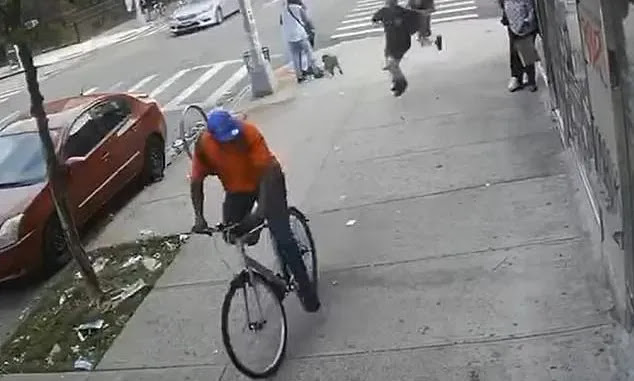 A thug on a bicycle who sucker punched a random 60-year-old woman in front of a fire station is being held accountable for his cowardly actions thanks to the lightning fast response of the firefighters who made sure he didn’t get away.

The incident, which was caught on surveillance footage, took place at around 5pm in front of the FDNY’s 214/Ladder 111 fire station on August 26.

The footage shows a 60-year-old woman in a blue shirt walking down the sidewalk when a man on a bicycle swerves over and punches her in the face, knocking her to the ground. He tries to speed off as four firefighters run after him.

The man on the bike turns left at the corner of Hancock and Lewis Avenue before he is caught by the four men.

The chase continued around the corner, where the firefighters struggled with the suspect and eventually took him to the ground.

Police say while trying to restrain the suspect, a 29-year-old firefighter was punched in the eye, causing bruising and swelling.

The firefighters wrestle him to the ground and pin him down until police arrive. He was then taken into custody.

As firefighters surrounded the suspect, he allegedly punched a 29-year-old fireman in the eye, causing bruising and swelling.

The woman suffered a cut mouth, but police said she declined medical attention at the scene, according to WCBS-TV.

Biggs and the victim were strangers, police said. Investigators are trying to determine a motive for the attack.

According to the NYPD, Biggs has 18 prior arrests, including for assault and robbery.

On August 2, Biggs allegedly slashed a man in the face.

New York City has been reeling from a crime wave this year that has forced the police department to increase weekend patrols citywide.

As the firefighters went after the suspect, the video shows others check on the victim.

“It’s bad. You can’t hit a woman. She’s very nice. The whole family, I know them. I grew up with them,” said Twin Alzokari, who works at nearby J&A Deli and Grocery.

Alzokari watched the firefighters jump into action after the assault, which happened right in front of a firehouse on Aug. 26 around 5 p.m.

The firefighters stayed with the suspect until police arrived and took him away in handcuffs as a crowd watched.

“You feel safe. They’re always helping the community, and that’s a very, very good job that they did,” Alzokari said.