The Kaaba Black Stone: A Holy Stone from Outer Space? 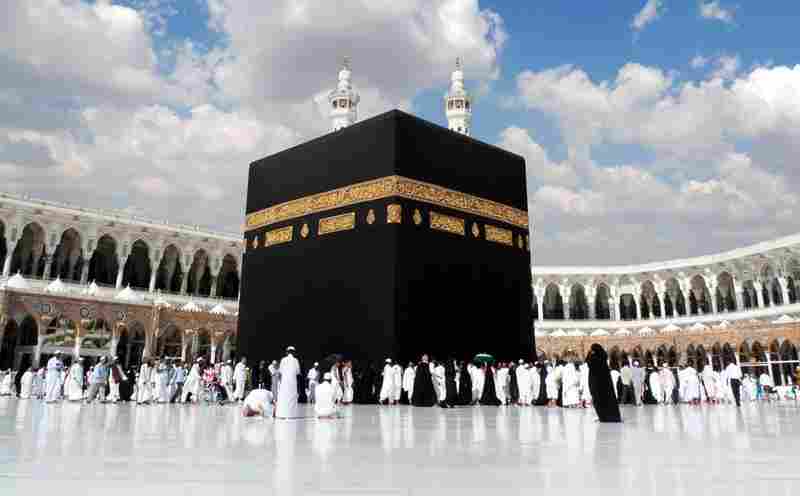 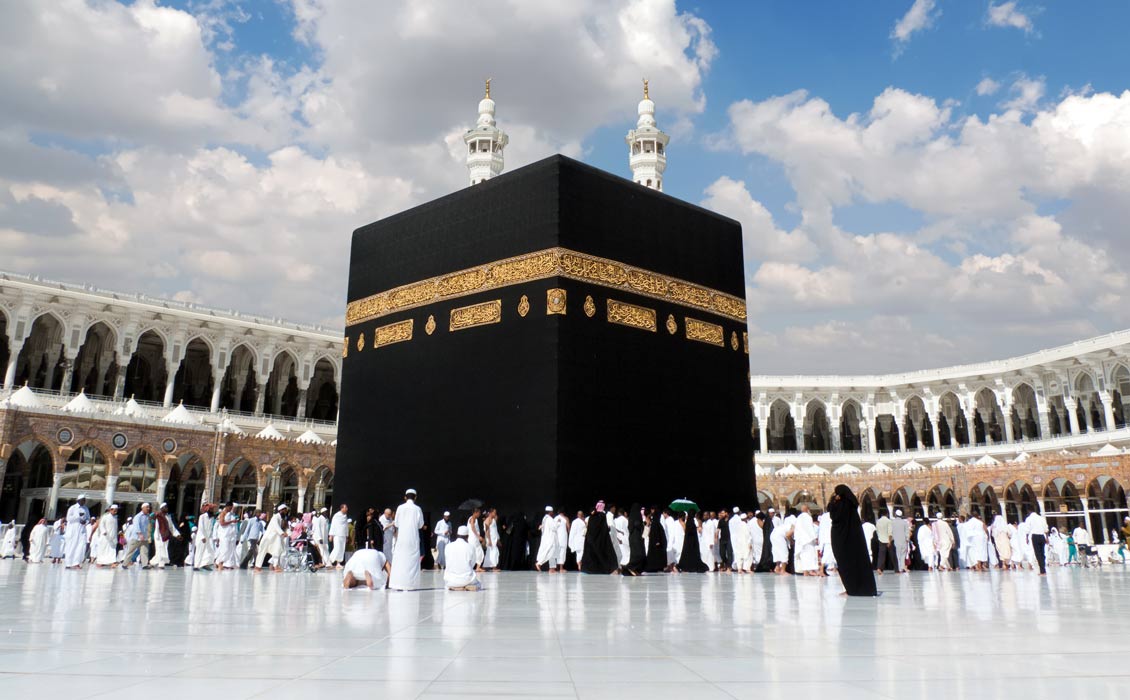 Every day, five times a day, Muslims across the world face the holy site of Mecca and pray. Mecca is believed to be the birthplace of the Prophet Muhammad but when followers visit the site, it is not actually Mecca they are facing but a building called the Ka’aba. The Ka'aba is a mosque and on one corner of this sacred building, is a cornerstone known as the Black Stone. Its history is shrouded in mystery and there is much speculation over what the stone might be. Many Muslims believe the stone is in fact a meteorite possessing supernatural powers.

Millions of Muslims travel to Mecca, Saudi Arabia every year and in a single day, Mecca is capable of attracting over two million Muslim followers for the annual hajj pilgrimage, considered one of the five pillars of Islam . 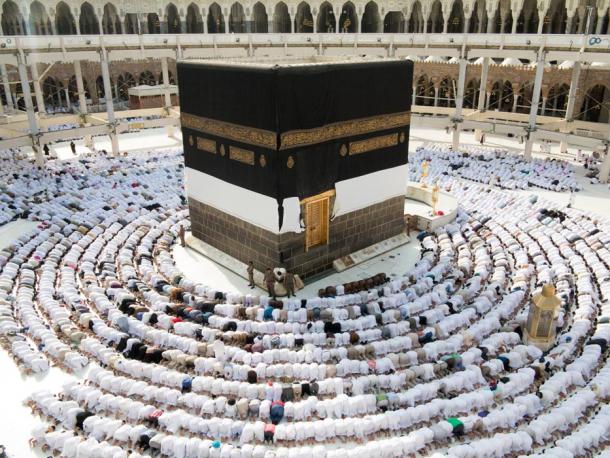 There, they gather around the Ka’aba, often written simply as Kaaba, a cubic-shaped building at the center of Islam’s most sacred mosque, Al-Masjid al-Haram. During the ritual of the hajj, pilgrims must walk around the Kaaba seven times in a counterclockwise direction, a ceremonial practice that has been going on for fourteen centuries.

The Kaaba measures 50 feet (15.2 meters) high, 35 feet (10.7 meters) wide and 40 feet (12.2 meters) long. It is covered with a black silk cloth, known as the kiswa and decorated with gold-embroidered calligraphy. On the southeast side of the building is a gold door. Inside, the floor is made of marble and limestone and has three pillars.

The Kaaba is built around a sacred Black Stone which is tucked away in the eastern corner about five feet off the ground. Muslims believe the prophet Mohammad once kissed the stone and during their mandatory, once in a lifetime (at least), trip to Kaaba, they try to kiss the Black Stone if possible.

If they are unable to, they simply point to it every time they pass on their seven-circle journey around the Kaaba. Each time pilgrims pass the Black Stone they recite a prayer from the Qur’an: 'In the name of God, and God is supreme.' Non-Muslims are strictly forbidden from touching it and most of the year the Kaaba is covered in black cloth. 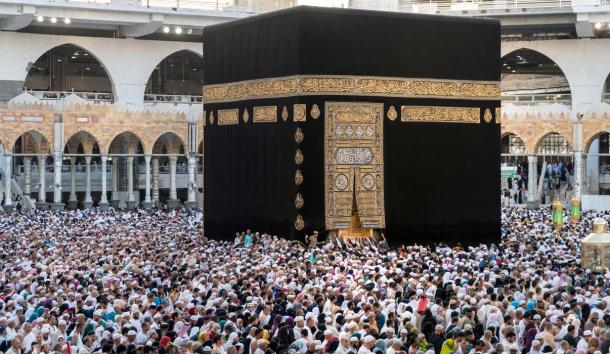 Most of the year the Kaaba is covered in black cloth. ( hikrcn /Adobe Stock)

The Cause of the Ka'aba Black Stone's Color

The stone is often described as a fragmented dark rock somewhere around two feet (0.61 meters) in length. Its surface is blackish in color, but there is speculation that this is due to how much it has been touched, along with the oils with which it is anointed. According to Muslim tradition, the stone was originally white, but turned black from being in a world where it absorbed humanity's sins.

First described in Western literature in the 19th century, Swiss traveler Johann Ludwig Burckhardt visited Mecca in 1814 and provided a detailed description of the Black Stone in his 1829 book ‘ Travels in Arabia’:

“It is an irregular oval, about seven inches in diameter, with an undulated surface composed of about a dozen smaller stones of different sizes and shapes, well joined together with a small quantity of cement and perfectly well smooth; it looks as if the whole had been broken into as many pieces by a violent blow and then united again.”

History of the Ka'aba Black Stone

Muslims believe that Allah ordered the Kaaba to be constructed. The story goes that Abraham built the mosque with his oldest son, Ishmael, in the likeness of Allah’s home in heaven.

Purportedly the oldest mosque on Earth, it is believed to have been originally used by pagans before Islam came into existence. According to Islamic tradition, the stone was set intact into the Kaaba’s wall by the Islamic prophet Muhammad in the year 605 AD.

Muslims also believe that the Kaaba stone was once part of the stones of heaven. There are various versions of its story of origin, all similar to one the another. When Adam was banished from the Garden of Eden, he was filled with sin. The Black Stone was given to him to erase this sin and allow him entrance back into heaven. Some instead believe the ancient stone was brought from a nearby mountain by the archangel Gabriel.

Over the passage of time, the stone has undergone significant damage. During the Umayyad siege of Mecca in 683 AD  it is said to have been struck and smashed to pieces by a stone fired from a catapult.

In 930 AD it was stolen by a small Shiite sect called the Qarmatians, who took it back to their base in Hajar, modern day Bahrain. According to the Ottoman historian Qutb al-Din, the Qarmatian leader, Abu Tahir al-Qarmati, set the Black Stone up in his own mosque, with the intention of redirecting the hajj away from Mecca. This failed because pilgrims continued to venerate the spot where the Black Stone had been. So the pieces were later returned. 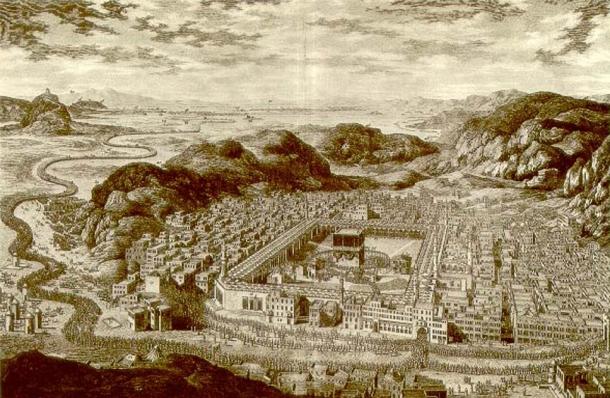 There are even stories about people being killed for trying to make contact with the stone. In the 11th century, a man allegedly attempted to smash it and was killed on the spot, causing only slight damage to the stone.

According to the Swiss traveler Johann Ludwig Burckhardt, in 1674 someone smeared the Black Stone with excrement so that "everyone who kissed it retired with a sullied beard". Persians were suspected of being responsible and were the target of curses from other Muslims for centuries afterwards.

Today, the stone is still broken up into several pieces, with estimates ranging from seven to as many as fifteen fragments. These are held together by a silver frame, which is fastened to the stone by silver nails. 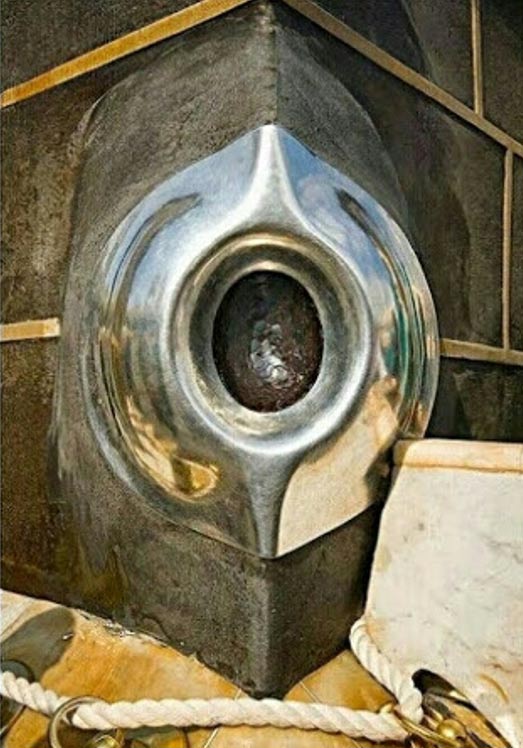 The Ka'aba Black Stone with its frame ( Harry Marlan/Google+ )

Is the Kaaba Black Stone a Meteorite?

Since no scientific studies have been allowed on the stone, it is only possible to speculate what it could be. Theories have ranged from the stone being basalt, agate, or obsidian rock, to an alien artifact. One theory proposes that the stone is a meteorite worshiped by the pre-Muslim, pagan Arabs.

According to Anthony Hampton and his team of geologists at Oxford University, “Part of the fog surrounding this stone is that the stone ’s caretakers haven’t allowed any scientific tests to be performed on the stone, for obvious cultural and religious reasons.”

Thus, attempts have been made to find other ways to obtain information about it. Local samples of sand taken from a 2 km (1.2 mile) radius of the stone, revealed quantities of iridium, a metal found in meteorites with an abundance much higher than its average abundance in the Earth’s crust.

Also found were many shatter cones, a rare geological feature, only known to form in the bedrock beneath meteorite impact craters or underground nuclear explosions. 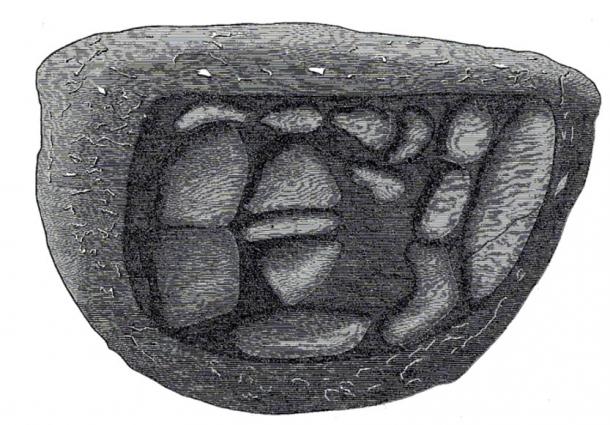 Drawing of the front view of the Black Stone. ( Public Domain )

However, another study done by Robert S. Dietz and John McHone at the University of Illinois in 1974 concluded that the Black Stone was probably not a meteorite or supernatural in origin. An anonymous Arab geologist who made the Hajj and examined the stone, saw diffusion banding, which points to it being an agate rock.

While today there is no consensus regarding its makeup, the Black Stone of the Kaaba is probably the most well-known holy rock in the world and it continues to be the centerpiece of the sacred Islamic pilgrimage.