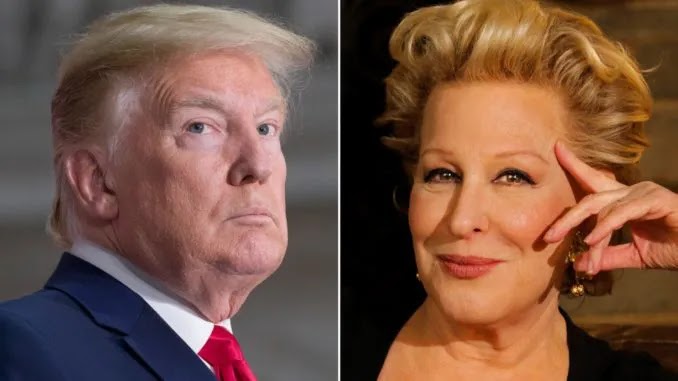 Bette Midler doesn’t like President Trump, his family or anything they stand for.

She is one of a growing list of leftist Hollywood celebrities that are now accusing the Presidet of being a murderer.

Director Rob Reiner has called Trump a murderer and pop icon Cher has claimed that the president “kills Americans without thought.”

On Sunday Bette Midler took to twitter to declare that the president is a murderer. She said he was “stupid, callous uncaring; all in all the biggest catastrophe to ever befall our poor nation. I can’t stop crying”

via @NYTimes: One of the saddest documents you will ever read. #DonaldJTrump is a murderer. Stupid, callous uncaring; all in all the biggest catastrophe to ever befall our poor nation. I can’t stop crying. https://t.co/sq5o3Hp2wQ

Breitbart reports: Midler’s screed links to a 4,600-word, five-person byline New York Times hit piece titled “Inside Trump’s Failure: The Rush to Abandon Leadership Role on the Virus.” The nearly 5,000-word Times article mentions New York Governor Andrew Cuomo once and New Jersey once, even though those two states’ roughly 47,000 COVID-19 deaths account for about  a third of the 142,000 coronavirus deaths in the United States.

In New York, according to the New York Post: “DOH figures on Tuesday showed 6,312 nursing-home deaths, slightly more than 25 percent of the state’s total 24,994 coronavirus fatalities.” Gov. Cuomo has been under fire for issuing an order in March requiring all nursing homes to accept residents who tested positive for COVID-19. The move is widely considered the cause of thousands of patient and staff deaths at nursing home and longterm care fatalities across the state.

In New Jersey, NJ.com reports: “About 43% of New Jersey’s COVID-19 deaths have been either residents or staff members of nursing homes and other long-term care centers. There have been 6,815 confirmed deaths at those facilities.”

Rob Reiner, Cher, Bette Midler and the rest of the Hollywood left have been conspicuously silent about how two Democratic-run states’ handling of coronavirus pandemic has resulted in deaths that account for a third of the countries coronavirus fatalities.