‘Bill Clinton Is A Pedo’ Trends At No.1 On Twitter As Two Eyewitnesses Place Clinton on Epstein’s ‘Pedo Island’ 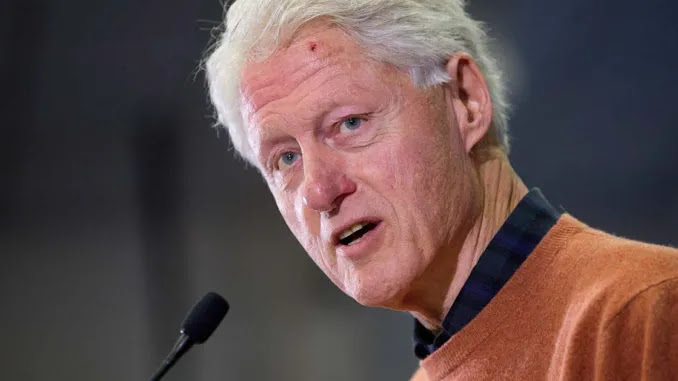 The hashtag #BillClintonIsAPedo went viral on Sunday, trending in the top spot on Twitter as hundreds of thousands of patriots called out the former president following the release of sealed court documents containing damning allegations that place him on Jeffrey Epstein’s notorious “Pedo Island.”

Unsealed court documents detailing Ghislaine Maxwell’s association with convicted sex offender Jeffrey Epstein contain records showing a meeting between one of the accusers, Virginia Giuffre, and her lawyers, where she spoke at length about Epstein’s private island, naming a few powerful men who allegedly visited it.

Former President Bill Clinton is one of the prominent names that have been mentioned.

In the document, the statement by the witness reads, “Ghislaine, Emmy, and there was 2 young girls that I could identify. I never really knew them well anyways. It was just girls from New York.” She said this in response to being asked, “When you were present with Jeffrey Epstein and Bill Clinton on the Island, who else was there?”

Bill Clinton’s spokesperson Angel Urena quickly denied the allegations by Giuffre, sharing a tweet that claimed, “The story keeps changing, the facts don’t. President Clinton has never been to the island.“

The story keeps changing, the facts don’t. President Clinton has never been to the island. https://t.co/XHVgyyI9Px

The denial did not convince internet users, who pointed out that Giuffre’s story hasn’t changed.

Internet users started flooding Twitter with photos of the former president with young girls, driving the hashtag #BillClintonIsAPedo all the way to the number one spot on the social media platform.

One user wrote, “#BillClintonIsAPedo Yes! Bill Clinton’s relations with underaged victims should be investigated, and the man brought to justice for whatever crimes he committed. Also, the nature of intelligence agencies and organized crime elements operation of sexual abuse rings…”

#BillClintonIsAPedo
Yes!
Bill Clinton's relations with underaged victims should be investigated, and the man brought to justice for whatever crimes he committed.

OMG... what a trend to wake up to on a Sunday morning #BillClintonIsAPedo pic.twitter.com/Mb4ZDNPdU6

Just doing my part to keep #BillClintonIsAPedo trending. The former pervert-in-chief is the first to get wide public exposure of what will eventually be many more exposures, and eventual arrests to come out of #Pedowood. These people are sick!

I can almost hear him say it, "I did not have sexual relations on that island". #BillClintonIsAPedo pic.twitter.com/zAxm6E9p84

The plan is that anyone who tweets/retweets this should stick together. @HillaryClinton can't suicide us all!

Hey y'all, don't use #BillClintonIsAPedo. He apparently doesn't like it trending. https://t.co/IJobFORkac