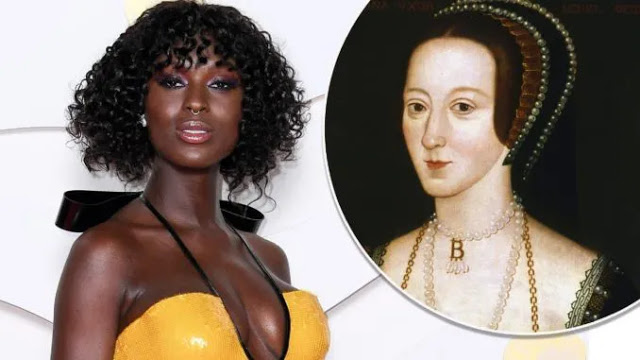 British TV’s Channel 5 have just announced that a black actress is to play Anne Boleyn in an upcoming three part period drama.

Jodie Turner-Smith is set to play 16th-century Queen of England Anne Boleyn, who was a white woman.

The baffling choice to play Henry VIII’s second wife has led to internet clashes with many suggesting that the move amounts to cultural appropriation.

RT reports: Turner-Smith’s turn as the medieval monarch was announced on Friday. The project was described by entertainment outlet Deadline as being a three-part “convention-defying” psychological thriller by Channel 5, set to “shine a feminist light” on the life of Boleyn, famously sent to her death by her husband King Henry the Eighth.

Social media quickly began overflowing with complaints about Turner-Smith playing a white queen. Commenters demanded “historical accuracy” and called it “cultural appropriation” – a term usually used when white people emulate other cultures. Many said that, logically, the Turner-Smith casting as Boleyn should be no more acceptable than a white person playing a well-known black historical figure.

Anne Boleyn was a white woman. Why would she be played by a Black actress?

I adore Tudor history we have a wealth of knowledge about the court of King Henry VIII & his marriages. We know as fact that Anne Boleyn (& all of his wives) were white women. So this drama will not be dealing with actual history. No need for me to watch.

Others mocked the future series by riffing on the concept of ‘whitewashing’ prominent people of color in history, noting how ridiculous it would be for them to be played by white actors. Some proposed that the US civil rights era heroes Martin Luther King and Rosa Parks be played by Caucasian actors, along with the South African anti-apartheid leader Nelson Mandela.