Clinton Says Biden Should Not Concede ‘Under Any Circumstances’ 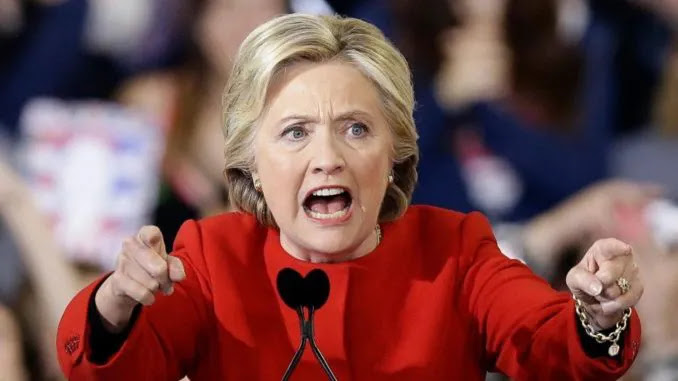 Hillary Clinton has urged Joe Biden not to concede the presidential race if he is trailing Donald Trump on election night.

“Joe Biden should not concede under any circumstances because I think this is going to drag out, and eventually, I do believe he will win if we don’t give an inch and if we are as focused and relentless as the other side is,” Clinton said.

RT reports: In a clip released just as the Republican National Convention was about to kick off on Monday evening, Clinton argued that if Trump emerges victorious in the November presidential contest but with a small margin, Biden should refuse to acknowledge his victory.

Instead, the former VP must brace himself for a dragged-out legal battle in which, Clinton believes, he would prevail in the end.

Clinton suggested that Trump would try to “mess up” the absentee balloting system, claiming that she was told that the GOP “had 40 lawyers challenging absentee mail-in voting” in a Michigan Republican presidential primary, suggesting that it was a rehearsal for the November election.

To counter that, Democrats should mount a legal offensive of their own, Clinton argued.

“We’ve gotta have a massive legal operation, we have to have poll workers… We have to have our own teams of people to counter the force of intimidation…“

Clinton’s words drew swift pushback from the Trump campaign, which observed that by calling for Biden to refuse to accept his loss “under any circumstances,” Clinton implied that the Democrats are poised to “steal the election” to oust Trump from office.

The Republican Party’s national spokesperson, Elizabeth Harrington, called on mainstream media to step up and grill Clinton, as well as “every single Democrat,” on whether they would accept the election results, the same way they have done with Trump.

“I’m sure the media will frantically ask every single Democrat if they will accept the results of the 2020 election,” she said. “They’re literally telling us they won’t.”

Trump supporters dug up Clinton’s own tweets from before the 2016 vote, in which she described questioning the outcome of presidential elections as a “threat to democracy.”