CNN Tries To CANCEL Christmas: ‘Probably Not Going To Be Possible’ 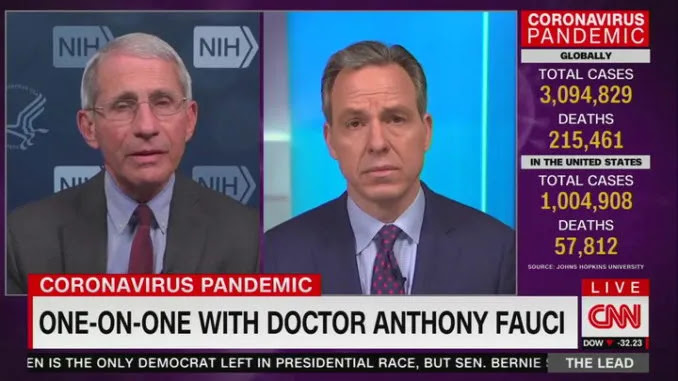 Americans must be prepared to cancel Christmas according to CNN, with anchor Jake Tapper saying “Christmas is probably not going to be possible” during an interview with Dr. Anthony Fauci on Sunday.

Across the US, millions of Americans are already planning on scaled-back Thanksgiving dinners, with only members of their immediate family “bubbles” invited.

As angst about the ruined Thanksgiving holiday continues to brew, Dr. Anthony Fauci acknowledged Sunday during an appearance on CNN’s “State of the Union” that American families should probably prepare to skip Christmas celebrations this year, too.

ZH report: While Dr. Fauci has repeatedly praised Pfizer and Moderna, and assured the American public that the FDA’s first vaccine emergency-use authorization could be handed down within days, he cautioned during Sunday’s interview that people should continue to wear masks and observe social distancing even after they’ve been vaccinated.

It’s just the latest unsettling hint that social distancing requirements could be here to stay.

“I would recommend to people to not abandon all public health measures just because you’ve been vaccinated,” Fauci said during an appearance on CNN’s State of the Union. “Because even though for the general population it might be 90% to 95% effective, you don’t necessarily know for you how effective it is.”

Later in the interview, Dr. Fauci agreed, with some trepidation, with Jake Tapper’s assessment that Christmas “is probably not going to be possible.”

CNN's Jake Tapper this morning: "Christmas is probably not gonna be possible." pic.twitter.com/z56ifNCr3G

Dr. Fauci responded that people “can’t abandon fundamental public health measures” until the vaccine has been somewhat widely distributed. That might not be until the second or third quarter of next year.

As the interview turned toward the “models” calling for massive numbers of COVID-19 deaths over the winter, Dr. Fauci claimed that calls for another 200,000 deaths in the US over the coming 4 months (a rate many times higher than where we are currently) could come to pass if people don’t obey new COVID-19 restrictions (exactly what he said last time). At this time, Dr. Fauci said that while a national lockdown doesn’t seem to be imminent, if the situation continues to worsen, anything might be possible.